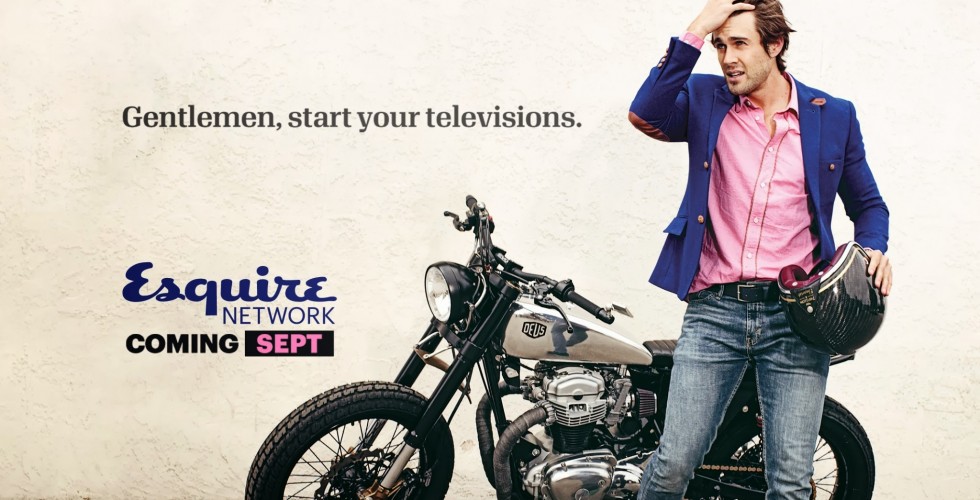 We didn’t even realize there was an Esquire Network until our remote landed on it by accident recently. But there is, and for those who are similarly surprised, it’s Comcast channel 48 in Baltimore City. A quick Internet search reveals that it’s owned by NBC/Universal which used it to replace the Style Network back in September. Since we never watched Style at all and couldn’t name a single show on it, we’re not exactly missing it. To the Chop the switch feels less like a channel swap and more like cable has dropped an early Christmas present right in our lap.

And it would be rude not to take that present out of the box and play with it a little, right? So we’ve been watching a lot of Esquire lately, trying to decide how we feel about it, exactly. On one hand, it’s tough to launch a new TV network. Even Oprah is barely scraping by at it. On the other hand, we do believe Esquire is the best bang for the buck on the ‘Men’s Interest’ shelf at the newsstand, and we’re pretty much the poster boy for the exact specific demographic they’re chasing (but perhaps a little more working class and a little less aspirational than their idea of an Esquire Man). So we’ve got a little more patience for it than we might otherwise. It’s basic cable, and basic cable is mostly crap, but this is crap that’s been intentionally tailored to our interests. As Nick Sullivan himself would admit, a cheap suit that’s tailored will always look better than an expensive one that’s not.

The Network’s original programming is off to a promising start. Shows like How I Rock It, Alternate Route, and Best Bars in America are the best they’ve got to offer and are pretty much what you’d expect: guys traveling around shopping for clothes, drinking at bars and checking out local culture around the country. It’s basically the magazine contents come to life. Also a plus are the culinary offerings. Shows like Avec Eric and Knife Fight are engaging enough in an already overcrowded cooking show genre.

Brew Dogs is a fairly interesting show about craft beer but there’s no getting around the fact that the hosts are kind of douchey and overly reliant on stunts and gimmicks like brewing beers at the bottom of the sea or on a Fourth of July parade float. Come onnnnn. Drinking craft beer is great. Worshiping it as an idol is an embarrassing waste of everyone’s time.

They’ve also produced some interesting magazine-related specials like Esquire’s 80th [anniversary] and Women We Love. We’ve missed them all so far but they’re sure to be re-run soon and probably often.

Esquire does make a few early wrong turns though. White Collar Brawlers takes two office drones who may or may not have a personal beef and follows them as they train in a boxing gym and prepare to fight each other. We could give a shit about anyone’s petty quibbles with their dumb cube-mate, and the show is packed full of melodrama and bathos.

Similarly Risky Listing is nothing more than a commercial real estate version of HGTV’s Million Dollar Listing: New York and follows a bunch of snotty, bratty, impossibly privileged and ridiculously overpaid commercial real estate agents in NYC as they do things like throw temper tantrums about attending meetings and quibble about closing dates and commissions. It’s easy to hate these people and their whole shitty Tom Wolfe-esque world immediately, but basic cable has been so overrun with bizarre characters behaving awfully that America (or at least the Chop) is sick to death of hate-watching things. Watching Risky Listing is the TV equivalent of hate-clicking all the garbage on the Daily Caller.

All basic cable channels have loads of empty time slots to fill with unoriginal content, and this may just be Esquire’s secret weapon. We recently discovered Party Down, which we’d never heard of before but is a pretty solid sitcom offering from Fred Savage, who had a hand in the early Always Sunny seasons. Esquire also fills some space with movie offerings, and whoever they’ve got selecting them is doing a pretty good job of it. Rather than just purchase the rights to every Van Wilder movie and run them all weekend every weekend a la Comedy Central, they’re showing movies people actually want to watch like Groundhog Day. Other rerun content is pretty thin at the moment, but at least Esquire is limiting infomercials to the extreme late night hours.

Overall, Esquire isn’t great but has a ton of potential. At worst it’ll continue to be what it is. At best it will be a basic-tier version of IFC and will keep the likes of FX, E, and Spike on their toes. It may even end up as a second-chance platform for some of the better ideas that Comedy Central develops and gives up on immediately. That would certainly keep uus watching.