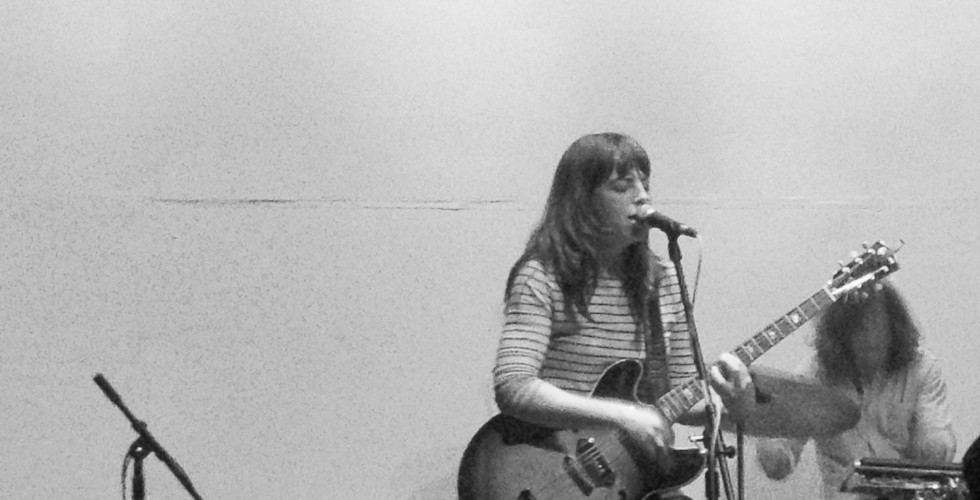 When we were in Nashville this Summer, poking around in all the shrines to country music we noticed a funny little phrase that kept popping up on plaques and descriptions over and over again: “old time family band.” Which is what it sounds like- you have a bunch of kids and teach each one a different instrument. The phrase doesn’t ring right in our ear because it’s something that doesn’t really exist in rock and roll. Sure, every once in a while you get a White Stripes or whatever, but by and large from the Beatles onward the thing has been to start bands with your friends from school or finding people in the neighborhood who play. Then there’s that famous story about Kiss being formed on the strength of a classified ad.

So Hop Along is something of an anomaly in indie rock: an old time family band. Singer, guitarist and MICA alumna Frances Quinlan has played both alone and with a second brother, but it’s with sibling Mark Quinlan and (unrelated) bandmate Tyler Long that she’s really been able to come into her own.

Personally, we’ve been following Hop Along for quite a few years now. We mentioned them in one of our earliest posts in 2010, and have been making a point to catch them since their first trip to the Charm City Art Space when they were known as Hop Along, Queen Ansleis. So we’re pretty comfortable in saying that for a band like Hop Along practice really does make perfect. Much like a young, out-of-state nephew this is a band that appears noticeably more mature and more polished each time they visit Baltimore.

One of the biggest milestones in every artist’s progression is the release of their first full length LP. There are some lucky bands seem to fall out of the sky fully formed and release a great record after just a few months. But for every Bad Brains and Minor Threat out there who strikes gold at 19, there are hundreds of thousands of acts that spend years writing songs, rewriting songs, trashing those songs and then writing more songs, going through lineup changes, investing in equipment, selling equipment, experimenting with new equipment, and doing the hundred other things that make it really incredibly difficult to form a successful band and make a great record.

Hop Along’s 10 track debut Get Disowned is a great record. Recorded over the course of two full years by Joe Reinhart (of Algernon Cadwallader fame) Get Disowned is the kind of record that, once completed, doesn’t matter how long it took to get to or record. However long it took it was worth the wait.

After all, it takes time to craft something as distinct as Get Disowned. There are moments in this record that may remind you of something you’ve heard somewhere, but on the whole Hop Along resists direct comparison to other bands, both past and present. It’s not an easy feat to take all your influences, live with them, learn from them, and ultimately ignore them and produce something that sounds entirely unique and modern, but with their debut that’s just what Hop Along has done.

And there are a few things on this album that we did find to be unique. From top to bottom Get Disowned seems to achieve maximum effect with minimal tools. There are no small songs here, nothing you’d sing in the shower or ever confuse for background music. The sound is much bigger than one might expect from a three piece, and the songs are all arranged in such a way that the most important sounds are the loudest. That may sound like a very obvious thing to say, but the most important sounds here often vary not just from song to song but from bar to bar.

Throughout the record though, the most important and unique sound is Frances Quinlan’s singing voice which by turns might remind a listener of both the manic emotion of Bjork and the polished and measured tones of Regina Spektor. Quinlan seems happy to reside in the space between the two, as if she’s singing with the secret knowledge that she could easily go far as a contestant on The Voice, but that the kind of singing The Voice demands is so sterile and vapid that it defeats the point of singing in the first place.

By extension, that’s the approach the whole band right along with Reinhart seems to adopt. Placed in the hands of another producer Get Disowned might have turned out very differently. If something’s slightly out of tune here, it’s done on purpose. If Quinlan’s voice breaks a little no second take is necessary. The full stops and pauses which occur throughout and allow her singing to come through completely unfiltered are a very conscious and very well-executed decision. Altogether this is an album that could have been as overproduced and insincere as an Arcade Fire release, but in the end chooses to be exactly what it is: an outstanding indie rock record that is worth playing on repeat.

Hop Along plays tonight at MICA’s BBOX theater in the Gateway Building (corner of Mount Royal and North Ave) in a benefit for Power Inside, an “organization that serves women and girls who are survivors of gender-based violence.”

The Gateway is a residential building and the show listing reads ’8-10′ pm, so it’s probably a good idea to show up on time to see Flashlight O and another band for whom practice makes perfect, Us and Us Only. The suggested donation for non-MICA students is a ridiculously cheap $5, and the door will also be collecting care-package type items for Power Inside- things like clothing and personal care products.