Thanksgiving is nearly upon us. For those of us who are Baltimore natives preparing a Thanksgiving table means getting a Turkey, and most likely a ham as well, along with stuffing and corn and yams and all, and of course, the pièce de résistance of the true Maryland Thanksgiving repast, Polish sausage and sauerkraut.

Most non-natives will balk at the notion of including kraut as part of a turkey feast. But they are for the most part fools and their knavish opinions are clearly the product of an ill-informed and inferior worldview. After all, how is one meant to make a next-day turkey reuben if there is no leftover sauerkraut in the fridge?

At the same time though, we can understand how kraut gets a bad rap. It takes quite a bit of effort to pickle your own cabbage, and even the most precious of Etsyfied hipsters isn’t likely to have enough mason jars or patience to convert copious amounts of cabbage into shredded, fermented slaw. The process takes at least a month. Sadly the only readily available alternative to homemade is the generic, stringy, pungent canned sauerkraut on supermarket shelves, best known as (and perhaps best suited to be) a hot dog topping. ‘Gourmet’ brands in supermarkets never taste much different from the basic can. 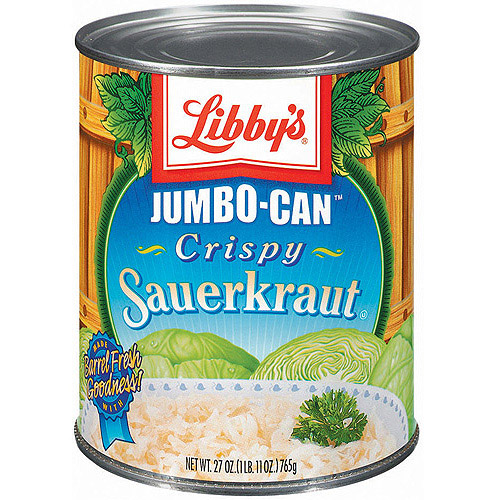 You’ll need to add more than that parsley sprig if you actually want it to taste very good.

Much like the gelatinous, can-shaped flavorless cranberry corn syrup and citric acid blend that passes for cranberry sauce, plain kraut out of the can deserves most of the scorn people bear it. However it also has this in common with cheap cranberry sauce: you can dress it up, and if you do it right it’s actually pretty good.

So we’re going to explain how to do it here. The Chop has been a vegetarian going on 20 years now (our family does set aside some sausageless kraut at Thanksgiving, natch) but sausage and sauerkraut is a dish we still enjoy regularly, usually with Smart Sausages or something similar. We’re going to explain the carnivore version though, which is roughly the same.

First: Sear your sausages in a pan over high heat. Just a quick browning on each side. Pull them and set them aside for a bit. If you’re cooking a good quantity of sausage you may have enough fat in the pan. If not, add some bacon grease or shortening.

Second: Add some sliced onions and some peeled, diced apple chunks to the pan and turn the heat down to medium. Saute them until they’re golden brown, about 15 minutes. Near the end add a few cloves of garlic sliced thinly or minced. Once the garlic is sizzling slide everything to one side and deglaze the pan with Boh or similar beer. Alternately, you can use gin if you want juniper flavor. Allow the alcohol to burn off either way.

Third: Strain your sauerkraut. You can do this by just pushing the lid into the can. Add it to the pan along with a small amount of malt or cider vinegar. You may wish to cut the acidity with a bit of sugar as well. Add in some stock or broth. Vegetable stock works best, even in a real-sausage recipe. Stir the pan and let it heat up covered.

Fourth: Once it’s hot add in a little fresh rosemary and thyme, fennel sprigs, a few carraway seeds, a bay leaf, a pinch of allspice, a dash of nutmeg, a small amount of celery salt and some black pepper. This is a basic list. If you’re missing one or two items it’s no problem. If you want to substitute something similar that’s fine too. Add your sausage back into the pan, pile the kraut on top of it and put the lid on. Reduce the heat to low and let it simmer for 90 minutes or more. When your sausage is brown all the way through you’re ready to eat.

When done right you’ll have some big flavors mixed and muddled with several more subtle flavors that all together elevate a fifty nine cent can of sauerkraut to a height of culinary excellence beyond most people’s belief. Because this dish contains such big flavor, and because it’s all protein and vegetables it’s best to serve it with pierogi or some other type of dumpling or plain-ish potato side for a complete meal. That is, of course, if you’re not serving it in its rightful place, right next to the Thanksgiving turkey.