It was unfortunate to hear in yesterday’s news that Santoni’s supermarket is closing up after 83 years in business. Growing up near Dundalk, about halfway between two Santoni’s locations, it was a regular stop for the Chop’s family growing up (although not as regular as Mars). We’ve got those old blue collar roots, and when papa was bringing home the bacon there was a good chance it might be coming from Santoni’s cause it was on sale in the circular.

But that’s the problem. Santoni’s was an icon of the 20th century, a relic of the past. Back in the store’s glory days of the 1960′s and 70′s things were different than they are today. The middle class, and even the working class ate differently. Our tables were served with things like Kraft shells & cheese or green bean casseroles made from canned beans and canned soup. Sunday dinner might be a meatloaf and some boxed up Ore-Idas… with a cake made of Duncan Hines mix after if it was somebody’s birthday.

People just don’t eat like that anymore. People who grew up in or after ‘Generation X’ have had access all their lives to enough good restaurants and Food Network programming and farmers’ markets and Top Chef type shows… not to mention every recipe in the world on the Internet for free. We’ve got better palates now, and Santoni’s has not kept up. A quick look around the store yesterday was very much like stepping back in time: from the superannuated customer base to the generic IGA brand products to, yes, a whole aisle in a relatively small store dedicated to shitty, sugary soda drinks. 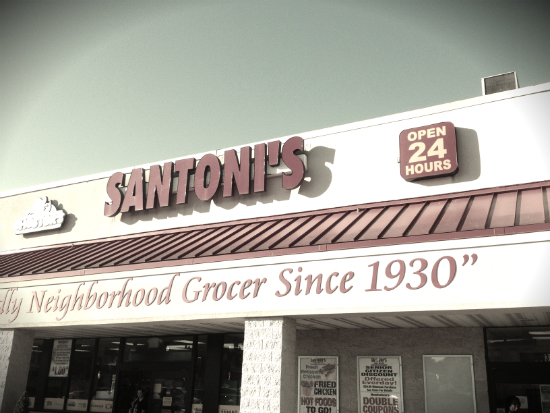 But the tastes of white folks with deep roots aren’t all that’s changed. Highlandtown itself is drastically different than it once was. The Hispanic community is firmly established there, and thousands of Mexican, Honduran, Dominican, Salvadorean, and other customers need a market to serve their tastes for the next generation or more. Santoni’s hasn’t given more than a slight nod to this demographic shift in its ‘international’ aisle, which explains why they largely stick to their own (increasingly high-quality) stores like Cinco de Mayo, which this blog has previously named one of Baltimore’s 10 best international grocers.

We’re not suggesting that Santoni’s should have remade itself as a Hispanic store, but it could have learned something from The Market at Highlandtown on Eastern Ave, which is an excellent mid-size independent grocer and does a great job of sharing shelf space between authentic Hispanic and Latin products and more conventional American offerings. but don’t take our word for it. City Paper named that store Best Supermarket in their Best of Baltimore 2011 issue.

It’s also worth pointing out that The Market at Highlandtown is still relatively new, off the top of our memory less than 10 years old. Also fairly young is the Shoppers’ Food Warehouse at the corner of Eastern Ave and Kane St which is much larger and more modern than Santoni’s. And even newer and more modern still are the Target and (coming soon) Harris Teeter at Canton Crossing.

Development continues in East Baltimore, and with the coming of the red line its pace will only quicken. Already in Highlandtown new construction is beginning to be easier to find than rehabs, and as the aging population that is Santoni’s customer base dies off, the neighborhood will get younger and more discerning every year. This article from yesterday’s Baltimore Business Journal contains quotes from 5 shoppers, one of whom is under 60.

And for the few folks who are non-Hispanic and on a tight budget and don’t want to go to Canton? They’ll go to the Aldi on Pulaski Highway, which has been undercutting Santoni’s on price for years.

Santoni’s is located in a shitty shopping center. No better way to say it. The whole place is kind of squat and bleak and depressing and the other tenants are things like beauty supply shops and discount cigarette retailers. We get the feeling that at any point Rob Santoni could have seen the writing on the wall and expanded his business to gain square footage. He could have opened up a spinoff butcher shop or seafood stand or wine shop. Any one of those things would have been a nice addition while freeing up precious square footage in the grocery store, but Santoni didn’t have the vision to carry it out.

He also didn’t have the sense to do any kind of marketing for the store aside from a weekly circular and maybe the odd ad in the East Baltimore Guide (and we’re just guessing on that. We haven’t read the guide since about 2001). Although it may have been iconic, Santoni’s was also utterly forgettable.

Nor did he have the vision seek out additional locations, even when the mayor was pleading with grocers and offering them tax credits and hailing Giant and Fresh and Green’s for opening stores in urban areas. Instead he’s chosen to do nothing but bitch and moan about the mayor and the city’s bottle tax.

Now don’t get us wrong: the Chop loves bitching about Stephanie Rawlings-Blake, as you probably already knew. But we believe that the bottle tax is good policy all around, and as we’ve pointed out above, the city is adding more grocers than it is losing.

The closest full scale grocer to Santoni’s that is not in the city is the Mars on Holabird Ave in Dundalk. And speaking as someone who grew up between the two and right on the city line, we can tell you that folks east of Ponca Street have been shopping there for years because it’s just a much nicer store and always has been. We can’t imagine folks west of Greektown going that far to save a nickel on a 2-liter. It takes about 40 minutes round trip and you’d burn up more than a few nickels in gasoline on the way.

Now, it’s possible that some folks in East Baltimore do elect to shop in the county at Costco or Sam’s Club, but we assert that these people have multiple kids and are traveling in SUV’s or vans and are buying very large quantities of groceries on each trip. They go to big-box grocers for bulk sizes and bulk-discount and have been doing it since well before the 2010 bottle tax. This too we know from experience. Santoni’s has never been in the bulk-product game.

We have yet to see evidence of even one single solitary person who actually lives deeper than a mile into the city and actually went to a suburb solely to save a nickel on so-dee-pop. More than that, if you can produce such a person who made such a trip and has a receipt to prove it, we’d ask if they’d bothered to do it twice or if it was just too much damned trouble.

So the real disappointment yesterday wasn’t Santoni’s store closing but was instead Rob Santoni Jr’s statement and subsequent media blitz blaming the mayor and the bottle tax as the “sole reason” for his store’s closing and the layoffs of 80 employees.

Santoni claims to have lost more than $4 Million since 2010 as a direct result of the bottle tax. He’s a goddamned liar. If that were true then other stores- stores closer to the city line would be sustaining similar losses and they are not.

It’s our opinion that Rob Santoni is a sniveling shit. As far as boys from East Baltimore go, the guy had it pretty good, being born into a well-established and very lucrative business. he strikes us as the Damian Bohager type: more money and luck than business acumen. All he had to do was not kick too hard and spend a few Summers bagging groceries while he was at Curley or Cardinal Shehan or wherever he went, get his ass through college and here you go, son… it’s all yours. There was never any question of Rob Santoni going down the Point, or worse, not having a Point to go down to.

And we can’t blame him. Nothing wrong with continuing on a family business if that’s your lot in life. It’s noble, even. But it’s also given Santoni the narrowest sort of tunnel vision, and now that it’s over he can’t see that it is he and he alone who fucked it all up.

Yesterday’s press release was nothing more than a snotty parting shot. We don’t see him sticking around the old neighborhood too much longer. He’ll close the store and tie up any loose ends, and probably have a pretty nice cushion to tide him over.

We don’t know what he’ll do next. Perhaps he could be the first actual Maryland business owner to follow Rick Perry’s advice and set up shop in Texas to avoid the big, bad Regulation boogey man. But good luck in whatever you do, Robbie- you’re going to need it. You’re on your own now and your next venture won’t be handed down to you. It’s going to be entirely up to you to succeed or fail on your own.

And whether you realize it or not, you’ve already failed on your own.