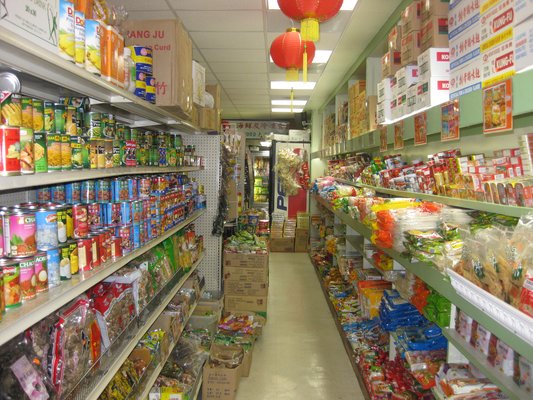 Beyond the almighty blue crab, Baltimore cuisine often gets a bad rap- and it’s not entirely undeserved. Traditional dishes like shad roe and terrapin soup are little more than relics from 100 years ago, and the typical supermarket cart here is chock full of Esskay meats, Utz BBQ chips and H&S potato rolls. Sometimes it feels like the Land of Pleasant Living is fairly overflowing with unpleasant food.

It’s not all bad though. Our farmers’ markets are growing fast and putting out more produce every year. Our restaurant chefs are constantly innovating, opening new kitchens and commanding attention and respect, and believe it or not we’re even home to some of the best ethnic markets you’ll find anywhere.

In yesterday’s post we highlighted five of the city’s best European grocers, and today we’re rounding out the top ten and taking on the rest of the world. Check out some of these genuine gourmet gems, and all of a sudden Harris Teeter and Whole Foods may seem somehow less appealing.

Potung Trading Chinese, 321 Park Ave. Downtown: For those of you who don’t feel like making the trek to H-Mart, Potung packs almost as much selection into a much smaller space. Featuring a large selection of dry goods as well as decent produce and tofu selections, Potung is a great place to do a full week’s shopping or just to swing by and pick up dinner on the way home. Don’t feel like making dinner? Check out Zhong Shan restaurant next door, which is easily one of the city’s most authentic Chinese restaurants. You’ll hear Cantonese spoken here, and can expect something else besides the typical sweet and sour pork and General Tso’s chicken.

Must Try- Potung’s noodle selection is out of this world. this is the place to stock up on any and all types of noodles including our favorite: Pancit Canton.

Punjab Groceries and Halal Meat Indian, 345 E. 33rd St. Waverly: Punjab Groceries doesn’t look like much from the outside, but the building stretches back a lot father than it appears to from the street, and they do a great job of keeping it packed full from floor to ceiling. For anyone who’s been intimidated to attempt Indian cooking at home, the best way to do it may be to jump right in headfirst, and here you can get everything you’d need to make any dish for $10 or less. The prices are incredibly low, and between that and the good selection of produce you’ll be tempted to do all your weekly shopping here.

Must Try- There’s so much good stuff here and so much value it’s truly difficult to pick a favorite, so we’re just going to go with a personal favorite and suggest you try some of their exotic varieties of pickled garlic, at a tiny fraction of the price you’d pay at Whole Foods.

Asia Food 5224 York Rd. Govans: Much like Punjab and Potung are surprisingly large, Asia Food is actually smaller than it looks. They’ve got a very large building, and barely fill it. Even so, there’s plenty of pan-Asian selection here with cuisine from Karachi to Kyoto. If you hang around long enough you start to get the impression that their customer base is as much Chinese restaurant owners as home cooks, and they stock a very large quantity of commercial grade woks as well as dishes, platters, bulk chopsticks and rice by the ton. (No, not literally.)

Must Try- Although they’ve got a decent selection of bean curds and exotic vegetables, the real highlight of an Asia Food visit is the freezer case. There’s a long wall of freezers lined up and stocked with appetizers like spring rolls and wontons, frozen mochi and other desserts and everything in between.

Cinco de Mayo 417 S. Highland Ave. Highlandtown: With two locations along Eastern Ave (also at 1312 Eastern) Cinco de Mayo is poised to become a Latin version of Eddie’s. In fact, the market itself is reminiscent of Eddies, being about the same size and with everything laid out along neat and orderly shelves. They’ve got the largest produce selection of any store on this listalong with their own pastelilleria, and long aisle shelves of everything else, there’s the beans shelf, the rice shelf, the salsa shelf, the beverage shelf, the tortillas shelf, etc.

Must Try- The butcher shop here is not your average grocery store meat counter, featuring exotic cuts you won’t find elsewhere and low prices on more standard cuts. They also offer several pre-marinated selections which makes Cinco de Mayo a must for your Summer cook-outs on the patio or roof deck.

Seven Mile Market 201 Reisterstown Rd. Pikesville: Just a mere two blocks outside the city line, Seven Mile Market is by far the largest store on this list and the only one that actually qualifies as a supermarket. One thing we noticed on our trip to Israel was that of all the Middle Eastern countries we’ve been to, Israel is the one with Western style supermarkets. So Seven Mile is entirely authentic in that you walk in and say “Huh. this is just like any other supermarket except with a lot of Jewish people in it.” It’s definitely not short on pickled fish and reminders of what is and isn’t kosher, but other than that it feels more or less like a Safeway.

Must Try- The deli here makes several kinds of knishes, so go ahead and buy them by the dozen. That may seem like a lot of knishes, but watch how quickly they disappear.