In it the Sun’s Yvonne Wenger describes some of the finer points of a large overhaul of zoning regulations that the city is now considering. One of those finer points is transit-oriented development, which really made us sit up and take notice. The only problem is that when it comes to specifics, there isn’t much to notice.

Any shift in policy that puts more emphasis on transit is very welcome, of course. But what really got to us about the article is that when mayor Stephanie Rawlings-Blake was reached for comment all she had to offer were her usual PR-flack talking points- at a total disconnect with reality. For example the mayor told the Sun:

“Any great city is a city that has high-quality, real transit, getting people from where they live to where they work, learn and play” and went on to say “With more transit-oriented development, I think it will take Baltimore to the next level in terms of being more vibrant and more of a 24/7 city.” 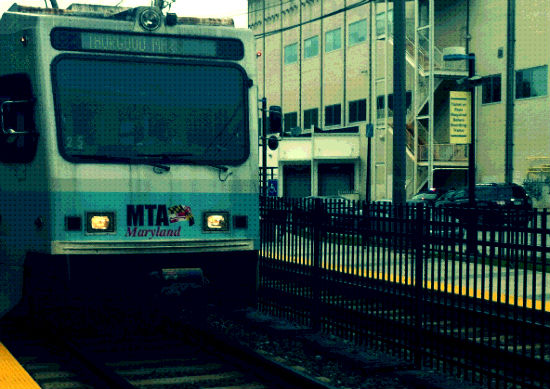 This is just dead wrong. The truth is that it makes absolutely no sense at all to develop around transit until our transit is totally re-worked, from the bottom up, to be a viable alternative to the automobile. Baltimore’s bus lines have been in need of an overhaul for decades: combining and streamlining routes, removing some stops and keeping drivers more accountable to schedules would be a start.

While Baltimore’s light rail line does serve some crucial functions like airport transportation, stadium stops and park-and-rides, we’d hardly describe it as a “game changer” and while we believe the red line will eventually be a nice addition we don’t forsee it being a ‘game changer’ either.

As for this nonsense about Baltimore being ‘more of a 24/7 city’ it is laughable. Using transit for something like catching an early flight or having a post-game revel at Power Plant is impossible with a light rail that only runs from 5am- Midnight. Those buses that do run all night are few and far between and with a 9 pm stoppage time the Charm City Circulator would fit better in a sleepy town like Harrisburg PA than a bustling Metropolis like NYC.

The zoning changes now being considered are comprehensive and far reaching, and their impact will last for generations. It would behoove our city’s leaders to understand its transit system a little better than what can be gleaned by the anecdotal evidence of ‘public comment’ and the word of self-interested MTA management.

So in the spirit of the Food Stamp Challenge we are now calling on Mayor Rawlings-Blake, City Council President ‘Jack’ Young and all other city office holders, planners, and higher-level employees to give up their car keys and use public transit exclusively for a 30 day period.

Use our system to commute to work. Use it to come downtown to your favorite restaurants. Use it on a Sunday or a holiday to try to get to a relative’s house for a visit. Use it to get your groceries and do other errands. Use it to go through, and to, some neighborhoods or suburbs you rarely visit.

We’re sure that this experiment would garner a lot of interest in the local press if anyone in elected office wants to take us up on it. If it can’t generate coverage from an outlet bigger than this blog then we promise we will cover it and report the results right here.

If at the end of 30 days of transit ridership you actually believe that our current system is worth developing around as-is then by all means do. But if, like us, you believe that the system can and should run more efficiently and be easier to understand then please take that into consideration when considering the implications of the zoning overhaul.