How sure are we? At least as sure as Nate Silver is. Over the last few days we’ve had much more fun watching the wingnuts and right-leaning media outlets try to argue with math than watching either candidate’s stump speech. If you’re not familiar with what we’re talking about here is an explanation from The Atlantic as well as an article we particularly enjoyed from Deadspin.

We could write a week’s worth of blog posts on that alone but this post is not about Nate Silver and Joe Scarborough. It’s about our predictions, which are thus: 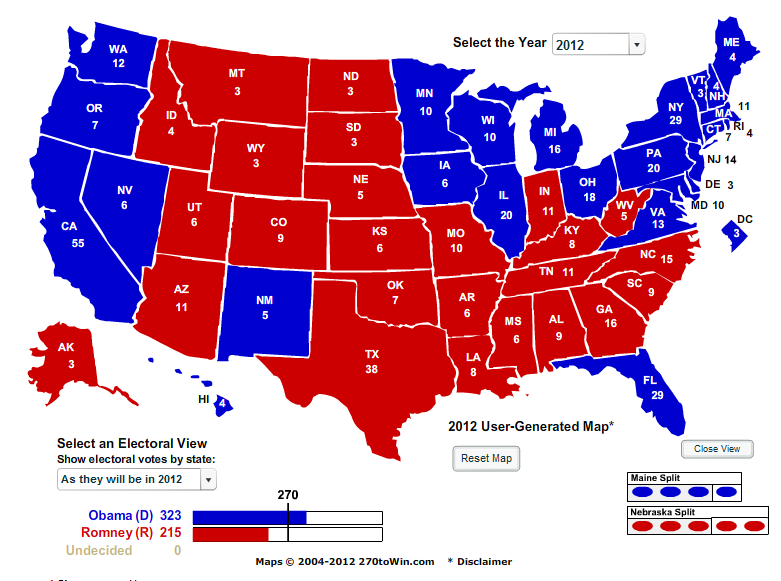 This is the map we made on 270towin.com. As you can see, we’ve got Obama with 323 electoral votes and Romney with a mere 215. It’s not based on anything more than gut but there you have it.

We think that the GOP’s voter suppression efforts are mostly failures, and that that failure will allow the president to squeak out a victory in Florida. The auto bailout will push Obama over the top in Ohio and Michigan. We think the Hurricane is a help for Obama, and will push him over the top in VA (and won’t hurt in Florida either). We also believe the Harry Reid machine will deliver Nevada for Obama.

Obama seems to be finishing strong with bigger and more excited crowds at every campaign stop. Early voting has also looked very encouraging. The only place we’ve got the President falling short is in Colorado, which is full of stinking Mormons anyway.

These bars came from Real Clear Politics. They show no change in the Senate and we think that sounds about right. They also classify 33 House seats as toss-ups. We believe the Democrats will gain 20 seats in the House. That would leave the Republican majority in tact and change the House make-up to 237 Republicans and 198 Democrats.

There’s been pendulum like action in the house since 2008, and we think this year the pendulum will swing a little more slowly. Obama’s win in 2008 flipped the House Democratic and it swung far too heavily back the other way in 2010. A 237-198 make-up is a little closer to normalcy, and if Obama performs the way we think he will a 20 seat gain is not unreasonable.

So there you go. Our baseless, gut-level predictions. We think they’re as good as any, but hell, we’ve been wrong before.