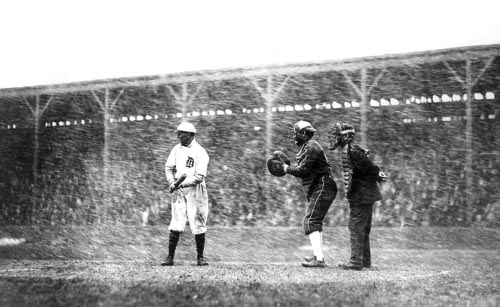 It's going to be a long slog this year.

This is the kind of team that you can’t even talk badly about. Even as a lifelong fan, it’s hard to take them seriously as a baseball team. Most people in Baltimore treat Opening Day like a city holiday, and many view it as the most important hallmark of Spring, but for us, this season is going to more closely resemble a bleak and dreary winter. It’s going to be long and dark, and at the end of it the Tigers or Angels will probably win the World Series, because they’ve decided that they want to buy it this year on the free agent market.

We favor the approach to Oriole fandom advocated over at The Loss Column, to which we’ve contributed occasionally, which holds that we should like baseball for baseball’s sake, and that even if your team stinks as bad as the Orioles, you should still get at least as much enjoyment out of going to the stadium and watching them as you would, say, going to see a random Rockies game on a business trip to Denver.

Of course, that theory isn’t perfect. Lifelong Baltimoreans have a lot of emotional baggage attached to the team that can be hard to forget when Peter Angelos is still the owner and they’re throwing bullshit ceremonies for Mike Mussina.

The real problem with this 2012 team though is that win or lose, these guys just aren’t fun to watch play. Even as recently as last year the pitching staff was a lot more interesting to look at. We had Vlad, who might have just been a washed up DH, but still loved the game and played it with the excitement and urgency of a kid. We had guys like Felix Pie who was fun to watch whether he was hitting for the cycle or making a costly boneheaded mental error. We had Luke Scott who, even though we hated him, could hit homeruns and liked to shoot off his mouth as well as his guns.

With last year’s Orioles there was a feeling that you never knew quite what you were going to get on any given day. With this team, you know exactly what you’re getting, and it’s not good. It’s not even fun to watch. This season’s going to be a long slog full of attrition, holes in the lineup, and playing from behind regularly. Anyone who expects anything different is delusional. People aren’t even hopefully predicting .500 this year.

We’ll still watch and all, but we just don’t think we’re going to get as much out of it as we have in years past. The Orioles as an organization need to drop all this ‘pack the yard’ and 2110 Eutaw nonsense and realize that the fairweather fans checked out 15 years ago and aren’t coming back anytime soon. They need to realize that they’re on the point of boring even their most loyal fans to death and they need to do something about it. Soon.

For the record, this blog’s official prediction is 59 wins, 103 losses.