A very well-kept secret of political activism is that a little bit of it can go quite a long way. When you turn on the news you can’t help but hear a lot about big money donors and fancy fundraisers. The images you see are all of paid staffers busily manning campaign offices or dedicated volunteers being bused to swing states weekend after weekend.

What they don’t tell you is that any action is much greater than no action at all. You don’t need to align yourself with an organization or give according to filing deadlines and targeted amounts. Just attending one benefit event, giving one small donation or volunteering for one single day is infinitely better than doing nothing, and in a state or local election, these small actions are of even more importance.

Coming out to tonight’s show at the Charm City Art Space is a small act that will make a big difference. 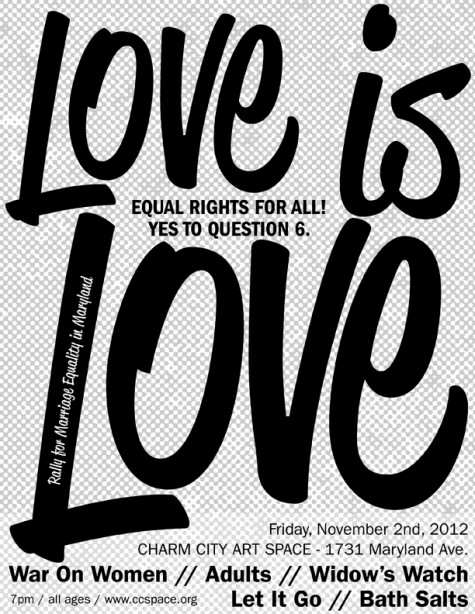 Proceeds from tonight’s show will be donated to Marylanders for Marriage Equality and used to help support their efforts to pass Question Six on Tuesday’s Ballot. Right now we won’t go into any long editorials on why it’s so important to support Marriage Equality or what you can do to help between now and Tuesday. You can click over to their website for that.

We’re just going to let you know that there will be a rally for Marriage Equality at the Space tonight, featuring guest speakers intermixed with the bands. It’ll be a great chance to find out what you can do to help on Election Day, and to donate over and above the door price if you wish.

The cause itself is worth showing up for, but this is also one of the best bills CCAS has put on in a while. Adults is easily one of the best bands going in Baltimore right now, and they’re paired up with War on Women who feature members of bands like Liar’s Academy, AVEC and more. If you missed Widow’s Watch at the Sidebar last week, you can catch them too along with Let It Go and the questionably named Bath Salts who may or may not actually be on bath salts. But probably not.