It’s been a while since we did the whole Bike Party thing. We tried to do it back in June and while we made it to the Block Party, we decided that 110° was just too damn hot for recreational riding.

Then we thought about doing it again in July when there was a coordinated ride timed to end at the Flicks From the Hill showing of Breaking Away, but we ended up leaving town and couldn’t make it.

Tonight though, our interest is piqued. We’re looking at perfect riding weather, we’re not going out of town (at least not this weekend) and there’s a Halloween Party at the end… 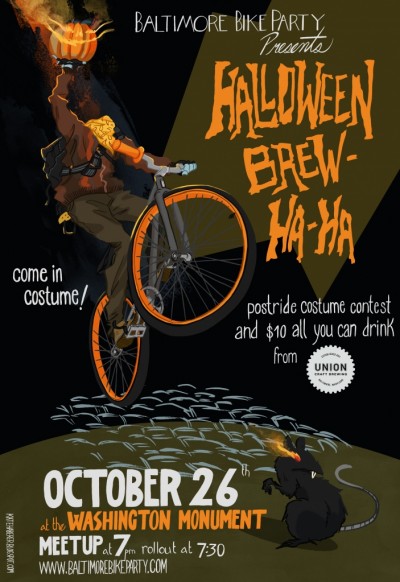 Apparently we’re not the only one with a waxing interest in the monthly ride. Since making a successful transition from a more traditional Critical Mass type ride in April, Baltimore Bike Party has been growing exponentially. Their focus on inclusion and ability to design and publish a route ahead of time has been a boon to ridership. This month’s event stretches over 13 miles (map) and may reach as many as 1000 riders.

What’s more, the ride’s organizers have been both savvy and skillful in organizing end parties and social events. We already mentioned Flicks From the Hill and the Station North Block Party, and tonight’s event ends with a large scale Halloween party at Woodberry’s Union Craft Brewing complete with a costume contest, food trucks on site, and a $10 all-you-can-drink wristband.

After taking the brewery’s short tour last Saturday, we can personally attest that it’s a nice little operation they’ve got going there, and their large, fenced parking lot is the perfect place to end the ride and start the party. It’s a far cry from jamming people into the back room of some bar, and our hats are off to the organizers for doing a great job month in and month out and keeping the Party fresh and interesting.

Update: As is indicated in the comments section, tomorrow’s (Saturday’s) Halloween party has been canceled.