Novels used to make their first appearances in serial format all the time. Many of the greats of American literature, from Mark Twain and Henry James to Hunter S. Thompson and Tom Wolfe, originally published some of their best work in serial form, usually via monthly magazines.

Fast forward to the 21st century. People aren’t reading novels the way they used to, and paper magazines are in a state of rapid decline. Yet somehow everything old is new again. If Justin Sirois has anything to say about it, the serial novel is due for a comeback.

In a world where content is almost completely divorced from medium, a return of the serialized novel makes a lot of sense. Many readers today are becoming accustomed to the Kindle/Nook/iPad style of reading where books fit into readers’ lives an hour at a time- between Tweets and blog posts and streaming movie trailers. Additionally, it’s a sensible way to sell a book. Many readers (including the Chop) are simply not going to shell out $27.50 for a first-edition hardcover of any book.

Digital serialization allows writers to keep their books feeling fresh and brand new as new chapters and volumes are released, and to keep the work affordable, with prices closer to newsprint than hardcover. And of course, once the serial is complete it can then be collected into a print version realizing the best of both worlds. 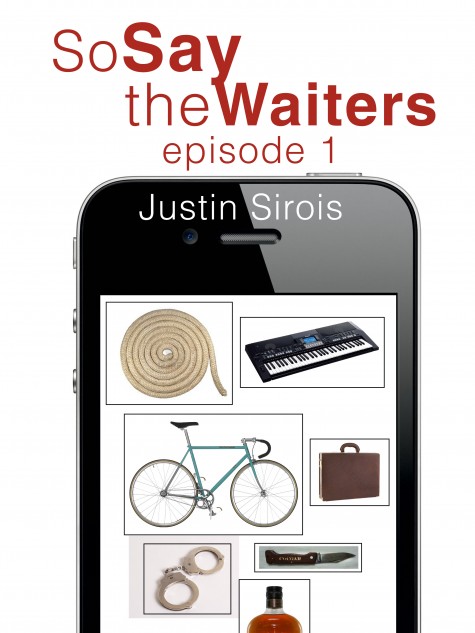 The first three episodes of So Say the Waiters are now available for Kindle.

Such is the case with Justin Sirois’ latest work, So Say the Waiters. The first book takes place in five ‘episodes,’ three of which are now available for Kindle on Amazon. (Kindle apps can be downloaded free for iOS, Android, and most other devices.) Once all five episodes have come through the Kindle pipeline, they’ll eventually be collected in a print edition as well.

We didn’t quite know what to expect when we downloaded the first episode recently. Sirois’ earlier novel Falcons on the Floor was a heavy, literary work about two young men attempting to flee the Battle of Fallujah and was written in conjunction with Iraqi refugee Haneen Alshujairy. Not the kind of thing you want to read on your iPhone in between Yelp reviews, Facebook updates and instant memes.

Centered around an app that lets users design their own kidnapping experience, the story focuses on Dani, a scenester bartender in Downtown Baltimore who’s hooked on the thrill of being Taken, and Henry, a hapless software engineer who’s recruited to help run KidnApp, as well as to use the app to track down and abduct users himself.

Okay, so in the realm of ongoing series’ of novels it may not be as ambitious as say, Rememberance of Things Past- but that’s not to say it isn’t a page-turner. Chapter by chapter, one episode at a time, Sirois deftly keeps the reader coming back for more, much in the same way we’ve all grown to compulsively check our cell phones for new messages and notifications which may contain some slight but thrilling intermediate reward.

Being set not just in Baltimore, but in that particular Baltimore where we live, Waiters contains a whole subset of little intermediate rewards. Aside from the dramatic turns of the pulp-style plot, many readers will recognize the numerous references to local spots like the former Talking Head, the Copycat, and Hour Haus. When Sirois has Dani speeding down Guilford on her bike or crushing on some dude in a band at the Windup Space, it’s a picture we can see clearly in our mind’s eye.

And if you ask us, it’s something we’d like to see with our actual eyes as well. Reading through the first two episodes, we had the constant impression that the whole concept of KidnApp belongs more to IFC than the iPad. Sirois may not be the next Proust, but So Say the Waiters could easily become the next Repo Man. We’d love to see it adapted for the screen, but until it is we’ll be content to download episode 3 while we (ahem) wait.