We’ve had our eyes trained toward the ballfield all season long at Oriole Park this year. In fact, we’ve focused so closely on the diamond that we missed the new Dempsey’s Brew Pub almost entirely. Oh, we knew it was there and all. It’s kind of hard to miss these days with its giant marquee sign that scars the face of the Warehouse. But until Friday night’s Wild Card Play-in Game we hadn’t made it in to Dempsey’s on a game day, and had completely forgotten it was open 7 days a week.

That may not be entirely our own fault though. There seems to be no sort of public relations apparatus in place at all. Their website, while serviceable, is minimal and very basic, and despite having been open for all of the six month season their Facebook page has only two posts and a paltry 67 ‘likes.’ Nor have we seen any sort of advertising throughout the season. (Hey Rick, give us a call. We’d be happy to sell you an ad.) 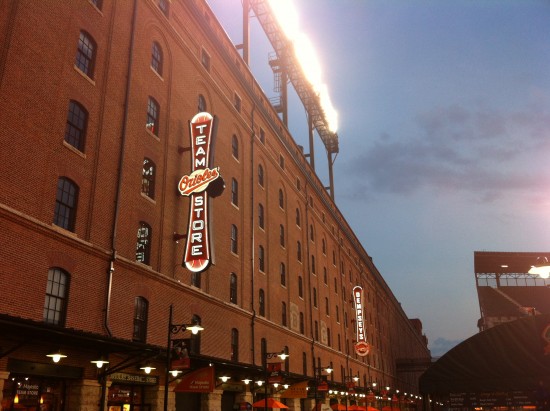 Even without the benefit of active public relations, Dempsey’s did manage to get the word out about their Wild Card Game specials, and we were among the several hundred who showed up to watch an away game at home.

Well, part of an away game, anyway. Every television in the place had been tuned into the NL wild card game before the Orioles began playing. Inexplicably, when 8:35 rolled around the Braves and Cardinals were still on TBS, and none of the TV’s were tuned to the AL game on TNT. It was almost as if the entire management and staff had no clue how to control the TV’s, and even if they did didn’t know where to find the game. The delay lasted more than a half inning, only being straightened out in the bottom of the first after the Orioles had already scored their first run and the crowd had become almost as outraged as the fans at Turner Field, chanting T-N-T repeatedly and openly booing the bar’s management.

To be honest, Dempsey’s management deserves some booing. We experienced problems throughout the night, ranging from minor things like the server neglecting to bring forks and napkins to fairly major things like the bar (which is also a brewery) running out of styles of its own beer, then coming around later to say ‘oops. Turns out we weren’t out of that after all.’ Our server, while amiable, was very young and clearly inexperienced and would do things like take drink orders from half the table at a time. She also served our table a beer in a pint glass by putting it down directly onto our friend’s iPhone through blatant inattention and only realized the error when we pointed it out.

So be it. We can put up with a lot for a good list of specials, and Dempsey’s was offering $2 hot dogs, $5 burgers, $5 nachos (including crab nachos), $2 house beers and $3 domestics.

The reviews on the food were mixed. Our veggie burger was not a burger at all but merely a lump of beans and rice on a burger bun. It was nothing resembling a patty. We could have eaten it with a spoon. A friend enjoyed his Jack Daniel’s barbecue burger immensely, calling it the best $5 burger he’d ever seen. The nachos were another popular choice, and while we credit them for using real cheese and fresh ingredients like jalapenos and guacamole, our order was missing the sour cream and pico de gallo advertised on the menu. A bargain at $5, but not worth the $11 full menu price.

The beer likewise depends on a low price to enhance enjoyment. It’s just not good beer. We found all four styles to be lacking in flavor and not comparable in quality to other craft beers of those styles. They also seemed to be low on ABV. If we’d drunk that many IPA’s elsewhere we would have been feeling a lot more hoppy.

It is refreshing though to be in the stadium and not be paying $9 for a Budweiser. At $2 per, we’re happy to keep swallowing beer for the entire game. Which is exactly what we all did, running up only a $130 tab for a table of seven.

Which brings us to the good part of this review: The part where we say that there’s definitely no better place to watch a baseball game. At 20 years old, Camden Yards has aged beautifully, and continues to improve with time. The difference between watching a game at Dempsey’s and any other sports bar is the difference between hearing Mass in a chapel or at the Vatican.

We arrived early enough to claim a table outside on Eutaw Street and looking in at the game on a pleasantly cool night with the pristine, dimly lit stadium as a quiet backdrop was both humbling and memorable. It was nothing short of Orioles Magic.

Dempsey’s design, layout, and accommodations get high marks with comfortable seats, large top-of-the-line flatscreens well placed around the bar and plenty of elbow room. Throughout the game the place always felt full but not packed, with groups of strangers high-fiving and mingling and all in good spirits. The experience would have benefited from audible play by play, although if you’re watching a regular season road game you should be able to hear the calls just fine, as we could during the first half of the Braves/Cardinals game.

We really hope that Dempsey’s and Delaware North can make some strides toward improvement next year. In the meantime, we wouldn’t hesitate to go back again this October. We’d encourage other fans to head down there as well, but it helps to take it for what it is and make the best of it. Just like the team on the field, the place shouldn’t be bound by high expectations. Overall rating, two cartoon birds.