Attention: this post is for all of you internet people who claim to love books so much. It’s for all of you who wrung your hands about the discontinuation of printed encyclopedias and incessantly re-post that John Waters quote about not fucking people who don’t own books. It’s for those among you who belong to book clubs that are really more like wine-and-gossip clubs and those who cluck-cluck at everything on Oprah’s reading list.

It’s time to put up or shut up. There is a book release party at the Metro Gallery tonight and you need to go to it. 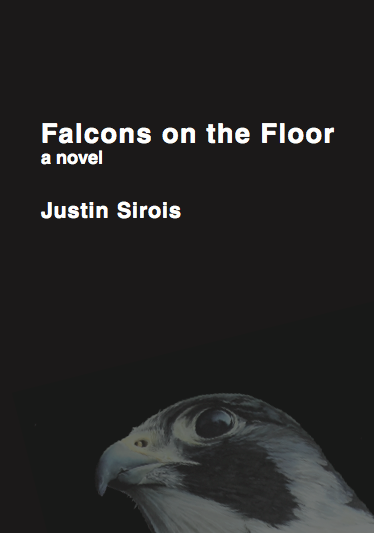 Justin Sirois loves books too. In fact, he loves them so much he’s even written a few of them. His new novel Falcons on the Floor will be officially released by Publishing Genius on April 3, but you can score your copy early at tonight’s reading and get yourself a nice inscription on the inside cover.

Justin’s been a fixture in Baltimore’s too-small literary scene for more than 10 years now, and we can personally recall him being at the forefront of the Iraq War protests locally during the days leading up to the invasion. That early dedication to the cause of peace manifested itself not just in demonstrations and appearances at readings around town, but later led to the founding of the Understanding Campaign, which has been encouraging international dialogue since 2007.

The war may now be over, but the work goes on. While many of us here at home are fatigued by even the mere idea of Iraq and want nothing more than to forget the Bush years entirely, Iraq is not going away, and will remain inextricably woven into our own national fabric for at least another generation, perhaps longer.

With that in mind it’s important to understand how this war has affected the people who lived through it. Now that it’s over, we may have a better opportunity to look at this war from an angle other than the ones presented by the embedded reporters and hero-worshiping politicians. Written in conjunction with Iraqi refugee Haneen Alshujairy, Falcons on the Floor presents coalition forces as the invaders that they were, as seen through the eyes of main characters Salim and Khalil, who flee their homes on the eve of the battle of Fallujah.

That’s not to say that the book is politically provocative, or even ‘political’ in any sense that we understand that word. This is, after all, a novel, and a piece of fine art. Such a work of art serves to present the complexities and emotions of war in a way that mere reportage and analysis will never be able to do.

If, by the end of page 300, you feel the book is saying that the war was a horrid and inhumane tragedy, it’s not Sirois saying so, it’s the War itself talking.

Tonight’s release party begins at 8 pm and will also feature Alphonso Lingus and Ed Steck. Admission is free. The Metro Gallery is located at 1700 N. Charles Street in Station North.