As we’ve noted before on several occasions, Baltimore has long been a city dedicated to the value of thrift. Whether it’s shopping in thrift stores or picking things up off the street, most Baltimoreans will go to great lengths to save a couple of dollars.

Baltimore is also a city famous for its distinctive antique rowhouses, all of which were built without central air conditioning. A Baltimore rowhouse can steam up hotter than a hammam in the middle of Summer, and thus was born the tradition of stoop sitting. Most outsiders don’t understand that some people sit on their stoops so long and so often because it’s simply too hot to exist inside their houses. 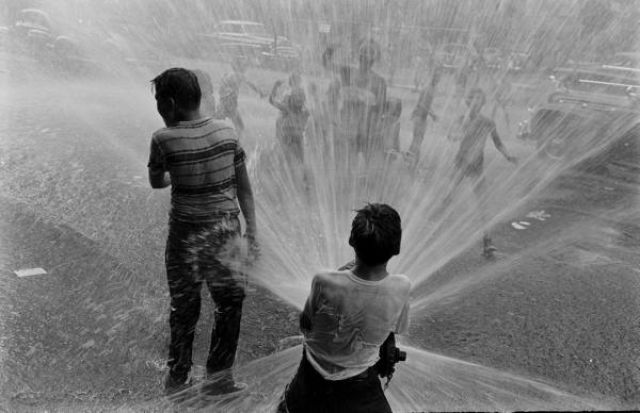 In Baltimore, this is a prefectly acceptable alternative to using air conditioning.

Nowadays, retrofitted central air is de rigeur in gentrified neighborhoods, but in many middle and working class rowhouse neighborhoods people rely on window units for relief from the heat. With the arrival of Memorial Day weekend, we’re at the peak of one of Baltimore’s most popular but least-discussed competitive sports: the delay of window unit installation.

It’s never fun to install a window unit, especially if yours are particularly old and heavy or if your windows are oddly sized or your unit needs repair. In Baltimore though, forestalling the installation of A/C goes beyond all that. Many people will place units in their windows and refuse to turn them on as long as possible. The Chop’s own parents used to do this back in the day, and even now we encounter many people in our own generation who grew up hardwired to thriftiness, and won’t run the air conditioning until it becomes absolutely crucially necessary. If there’s one thing in Charm City that’s universal, it’s a bitter hatred for BG&E. A refusal to pay for any more energy than necessary is a small moral victory.

Some people have a fixation on a magic number and won’t turn A/C on until the first 90° or 95° day. For others, they do all they can to hold out to a specific date. Some refuse air conditioning until the end of May. Some push for Fathers’ day. The hardiest and most foolish try to make it all the way to July 1 in a test of willpower, and even then turn it on only at night.

This local sport is peculiar and amusing, although it’s not one in which we’ll ever participate again. Bills be damned. We make a good living and power isn’t that expensive. for a buck or a day or whatever it costs we’d much rather be cool and comfortable for four solid months. We’ve had our bedroom A/C running for a month already, and we’re pleased to report that the window unit/ceiling fan combination we’re running in our living room works even better than we thought it would. It’s downright chilly in there now, and it’s going to stay that way all Summer.