Typically on this blog we only feature cocktail recipes we’ve come up with on our own. Today though we’re going to do something a little different, and feature a drink that was introduced to us by a friend this weekend. How could we not feature it? It’s so simple, and so delicious that after the first sip we had the distinct feeling that we’d be drinking these all Summer long. 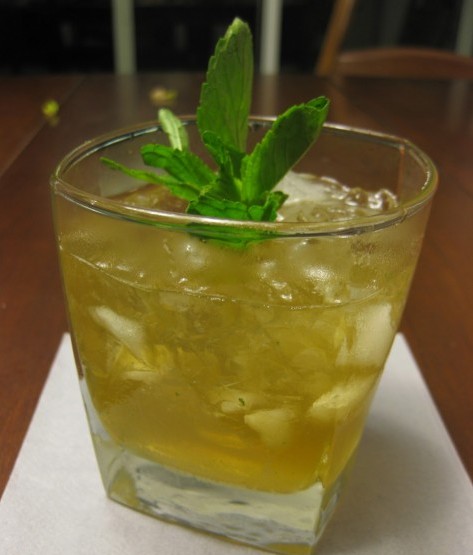 A visual approximation of the Friend Collector.

The friend who introduced it to us said that it didn’t have a name, although it’s really nothing more than a small tweak of a classic drink, the Whiskey Smash. We’re going to go ahead and name it the Friend Collector, after the band of the same name. It’s a very appropriate appellation- if you decide to buy or make this drink for people around you, you’re bound to start collecting friends pretty quickly.

Muddle mint leaves in syrup, then add Bourbon and ice and stir. Add Limonata and stir a bit more. That’s it.

The tweak is using Italian Limonata as opposed to fresh lemon juice and any other combination of bitters, water, etc. We’ve always held that one of the main problems with the “craft cocktail renaissance” or whatever going on right now is that it’s a lot of fucking work. We don’t want to brew our own bitters and plant a pomegranate tree in the yard and cut lemon twists with surgical precision… we just want to pour good drinks and drink them.

This is one of those ideas that we probably should have come up with on our own. We’ve used fancy high-end lemonades before to good effect (usually with rum) and God knows we drink enough whiskey and lemonade during the Summer, but until now it’s just been cans of Country Time.

No matter though. It’s such a simple recipe we’ll never forget it, and such a delicious drink you might want to go ahead and mix up a whole pitcher while you’re at it.