In a previous post we laid out our philosophy concerning art collecting, and featured the first painting we’ve purchased for the house. Basically, that philosophy is that we’d rather keep our walls blank until we can afford to buy genuine work that we’ll truly appreciate, like portrait work that’s either realistic or abstract.

Last month when we posted our Pictures of Jerusalem, there was one image we intentionally omitted from that post. It was this one: 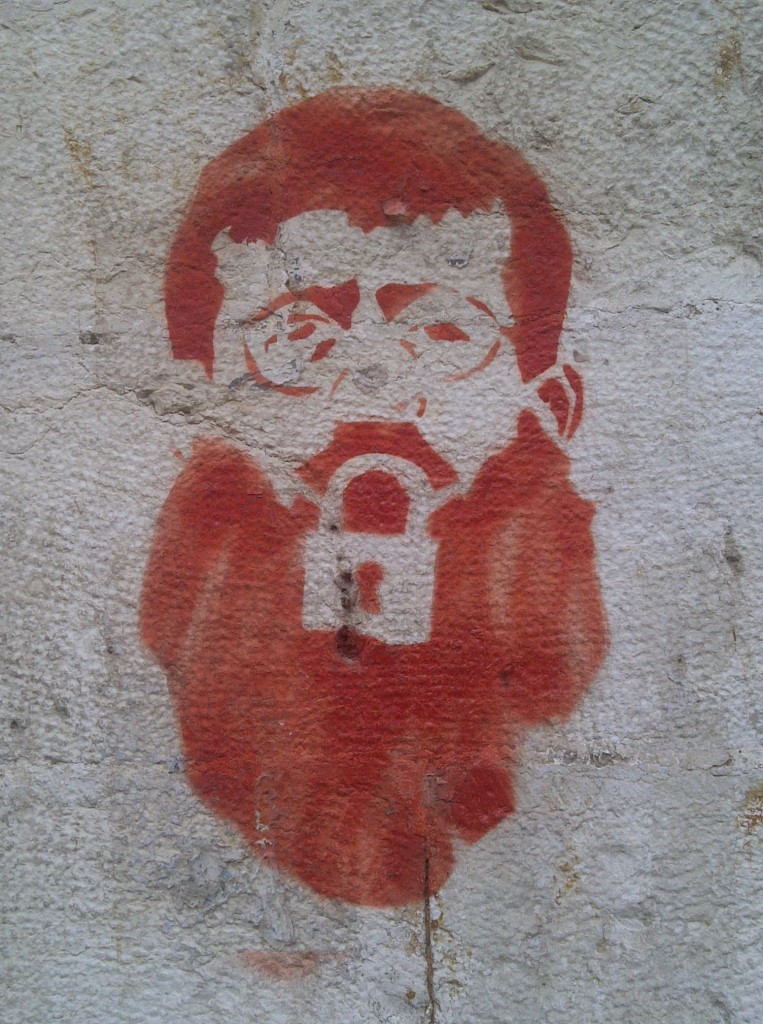 This is a piece of street art that we found on a Jerusalem wall outside of Herod’s Gate. Even working in remote areas and missing out on most of the news, we immediately recognized that it was an image of Palestinian political prisoner and hunger striker Khader Adnan. The stencil itself was stunning, and we stood on a fairly crowded street for several minutes studying and contemplating this the same way one would do with a museum piece. We snapped this photo with a cell phone.

For those unfamiliar, Khader Adnan was arrested in his home by Israel on December 17, 2011. The next day he began a hunger strike in prison that eventually became the longest in Palestinian history and lasted for 66 days until an agreement was reached in February and he was released in April. At the time we were there and took this photo, his case had sparked massive attention on the streets, and inspired hundreds of hunger strikes in solidarity by Palestinians throughout Israeli prisons.

[one_half]It wasn’t until we returned home that we realized that this hastily taken snapshot happened to turn out very nicely. We found we were looking at the digital version almost as intently as we stared at that wall in Jerusalem, and we decided that it would be suitable for framing.

We had it printed, chose a frame, and took it over to Fleckenstein gallery on Keswick Avenue to have them put it all together. We’re absolutely thrilled with the results.[/one_half] 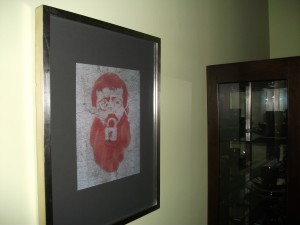 When we set out to build an art collection, we never imagined that we’d put anything of our own into a frame. After all, we’re not an artist, and most of the pictures we take are just so much digital junk. But trying not to sound pretentious, we love the artistic statement that this makes. The padlock symbolizes Israel’s strict management of the publicity of his case.

In Adnan’s own words: “They banned the media from covering my case, proof that they are afraid of the truth. Even after I ended my hunger strike, as I was being transferred from the hospital in Safad to Ramleh, they did so in a way so that no one could see me. They kidnapped me and pushed me through an inner garage. My appeal was held in the hospital cafeteria! Is Israel that afraid of showing its true face to the world?” 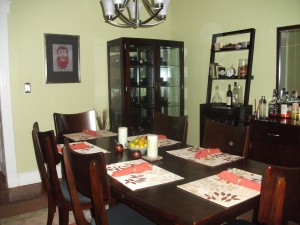 This is how it looks in our dining room.

[one_half_last]Keeping this in our home is not meant to be an explicit endorsement of any Palestinian position, or even of Khader Adnan himself. (Although his recent hunger strike was meant to specifically protest Israel’s policy of Administrative Detention, and as such we can say that we personally do support that action and oppose Administrative Detention.) If you ask us, we support Israel… but we also support the Palestinians. We’re certainly not alone in this position, although it is often difficult to articulate. The struggles between Israel and [/one_half_last] Palestine are so muddled because the truth is that both sides are right. And at the same time, both sides are doing wrong.

Khader Adnan is an ideal example of that. Before this he’s spent years in both Israeli and Palestinian prisons, and has had some level of involvement in the Palestinian Islamic Jihad. Our feeling is that he is someone who grew up Palestinian; who was a teenager in the nineties when tensions were much higher even than they are today. He was likely radicalized to a certain degree as a younger man. Now that he’s on the other side of 30 and has started a family he’s likely become wiser, studying for a masters’ and working as a small entrepreneur, and embracing nonviolent tactics to continue the struggle. While he has been a legitimate convict in the past, this particular detention was purely political in nature. There was no charge against him before his arrest or during his detention.

The bottom line is that it doesn’t matter whether Adnan is a terrorist or a freedom fighter; a violent man or a peaceful one, a genuinely good person or a hateful bastard. Either way, his human rights were violated when he was arrested and imprisoned. When he won that hunger strike, it wasn’t important because he won publicity or a policy change. It was important because he won back his humanity.

In that sense, this photo is not even a piece of political art. It is a portrait of a man who put his life at great risk to simply assert that he is a man, and is entitled to the dignity shared by all men. When we sit at our table and share food with our friends and family, we’ll look at this and think of what it means to be hungry.