We told you earlier this week about our New Year’s resolutions, but honestly, that was mostly all stuff we were resolved/planning to do anyway and New Year’s day was just a good excuse to blog about them.

The truth is that we resolve stuff all the time, and although the results are rarely immediate, these resolutions always come to bear eventually. As a case in point, two years ago, before we moved into this house, we determined that it would be well to begin a collection of original art. At the time, we had no space at all for hanging or storing art, but we knew that we’d have a house eventually, and we purposefully decided to reserve all of our wall space for original art. 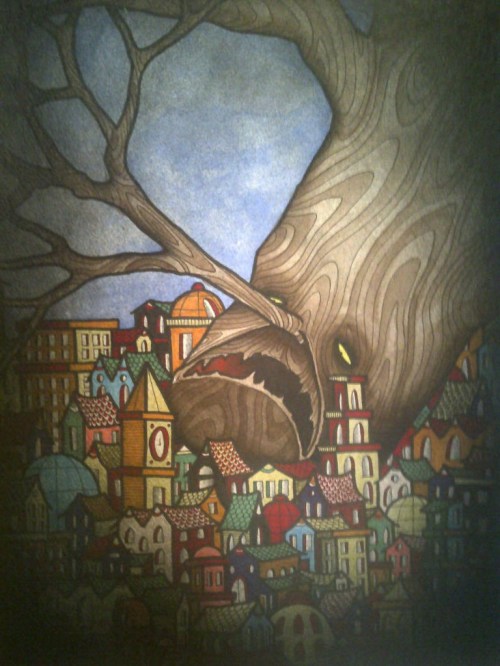 We’re a grown up now, yes? So we’d be Goddamned if we were going to have posters and fliers and shit hanging all about the place. Likewise, we’re not going to go down to Target and pick up the same crummy Van Gogh prints that pass for tasteful among the tasteless, or to Bed Bath and Beyond for mass produced sconces, abstractions and bits of Americana. We’d rather stare at blank walls, thanks.

We’ve been living more than a year now with entirely blank walls throughout the Chophouse. Admittedly, for most of 2010 buying furniture took priority over art collecting, and we’ve still got to re-furnish the living room after roommate moves out, but all along we’ve been keeping our eyes open. We bought a small drawing at the Gallery 788 Show we blogged about back in April, but that sits on our bookshelves as opposed to hanging on the wall.

Recently though we found the above painting hanging in a show at Johnny Rad’s. It’s called Bunch O’ Houses, by Brett Burnham. You can see it for yourself, so we’re not going to get into all the reasons we like it and saw fit to buy it, but it definitely checks all the boxes for us in what we’re looking for towards building a collection. It looks outstanding hanging next to our wardrobe.

We’d also like to extend another Thank You to the waitress at Johnny Rad’s who had reserved this piece for herself, and kindly let us pay cash over her reservation. It was a very generous thing to do, and we appreciate it greatly.