Whenever some local publication has one of those “Baltimore’s Best Bartender” contests, we always nominate and vote for Jeremy Crawford. A fixture at the Club Charles for years, Jeremy has never been anything but kind, patient and understanding when he’s working at Club Chuck. He’s one of the people that makes a hometown feel like home.

As great as he is behind the bar though, it’s not what he does best. He’s also one of the city’s most talented visual artists, with a new series of work opening tonight at the Metro Gallery. 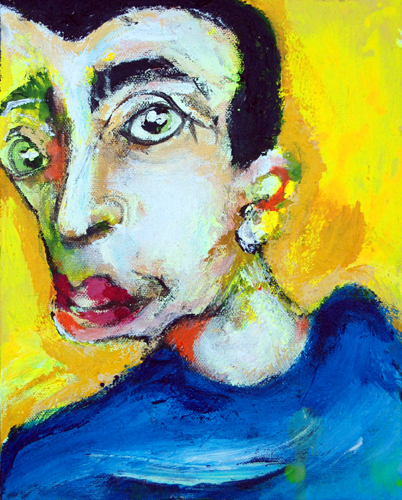 A Crawford self-portrait from 2008.

Tonight’s opening reception runs from 6-10 pm and features live music from Raili Haimila of Lo Moda and Mike Furniere of Sri Aurobindo. Here’s a description from the Metro Gallery site:

Jeremy Crawford’s paintings have always explored the boundaries of representation, but many of the paintings in “We Are Gone” started without even a clear definition of who the subject was. As each work developed, the characters began to develop a personality and became someone that was familiar to the artist. The same idiosyncrasies that we dredge up when trying to recall someone’s face emerged in the paintings, and led the artist to the identity of his subjects. Some of the paintings are based on people, others are rooted in abstract concepts, such as death or love. Crawford believes all loan deeper insight into the way we perceive identity.

As an aside, we also want to mention tonight’s show at the Talking Head featuring Holy Tongues, Bad Biology, At the Heart of the World, and the debut of Old Lines. It’s an outstanding bill, and it’s all to benefit Moveable Feast’s Ride for the Feast. Doors for that show are at 8 pm.