As some of you may know, we’ve been selected to participate in the Test it, Blog it, Win it contest which is going on right now at Su Casa Furniture. We’re incredibly excited about having the opportunity to try to win some furniture by blogging about it, especially since our living room has been completely bare for a long time, and we were in the market for furniture anyway.

The way it works is that we select a couch, blog about it, and possibly get it for free. If not, we still get the chance to buy it for 50% off retail, which is a pretty sweet deal all by itself. All we have to do is select a couch. Easy, right?

Actually, selecting a couch is decidedly not an easy process. At least not for us, anyway. We’ve put more thought into this decision than most others we’ve made. We certainly gave it a lot more consideration than say, buying a car. And why not? The fact is that this living room is a good deal more expensive than any car we’ve ever owned, and we expect to keep it much longer. We’re going to be spending a lot more time in it than we would in a car, and it’s going to be a much more personal reflection of who we are than a Honda or a Chevy ever could be.

Seriously: you buy a little economy car to get around in and maybe you insist on a sunroof or a stick shift or a certain color. You slap a couple of bumper stickers on it and that’s it. In furnishing a room there are dozens of variables to consider, and hundreds of thousands of possible combinations. Even in a modest rowhouse. 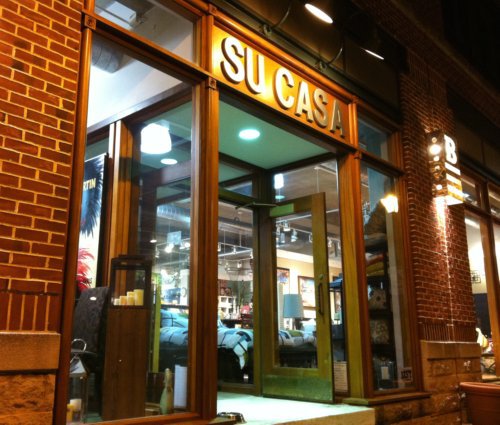 But it all starts with a couch; the biggest and most expensive piece in the room, and the piece that we’re meant to “test.” We were prepared to go fairly high-end on the couch, and spend a good deal of our budget there. After all, you can always buy a stand-in lamp or table to serve for a year until you find something perfect, but that’s not the case with a couch.

To tell the truth, we were a little worried about limiting our selection by committing to a single store with the contest. Turns out, that concern was completely unfounded. What we failed to realize was that all of their furniture is entirely custom made. Unlike, say, Crate and Barrel where a couch comes in a two or three stock fabrics and you can special order a few more (at additional cost), At Su Casa you’re literally designing your own furniture.

In the case of a couch, You first have to decide on what sort of couch you want. And there are many options. Even when you find one you like, many of their pieces come in different lengths, and are available with or without chaise lounge options on either side. Once you find one that passes the ass test, so to speak, you get to go through literally hundreds of fabric swatches of varying materials, colors and patterns. The fabric selection is as generous as what most full-time design studios offer, and… They are not broken down by price. Hundreds of fabrics- one price.

After that, depending on the particular piece you picked you may have to select from half a dozen wood finishes for the legs, and if it comes with pillows you get to go back through all those fabric swatches again and select pillow fabric. It’s a whole process. And then add into the bargain that we were also permitted to select from the inventory at Pad, which is directly adjacent to SC’s Fell’s Point location, our head really started spinning.

Here is the part where we level our one little bit of constructive criticism about Su Casa: that what we saw in the stores did not match what we saw on their website. Not even close. We give them a lot of credit for displaying different items at different stores. There are five locations including Pad, and it really is like shopping at five different stores, which is a great thing. Each store had the same catalogs for perusal, which was also quite helpful. Those catalogs offered much greater selection than the website, which doesn’t even mention fabric choices. Basically, their websites are making them look bad.

Their Design Blog on the other hand is a pretty handy web resource. Maintained by their staff of in-house designers, it’s full of tips and ideas for furnishing and decoration, and is written with a very Baltimorean sensibility, which is always a plus. Those living rooms on Houzz look great, but we don’t have a 20′ x 40′ space with a conversation pit and built-ins. People here live in rowhouses and condos, and these designers really understand that because they do too. (That blog is a separate domain though. It’s at designbysucasa.com.)

A company with five large stores really ought to have someone whose job specifically includes keeping their web presence up to date, including not just their own sites but their social media accounts as well. It’s clear that their website is seldom updated, and for a well-established company with a great name and image around Baltimore, they could have more ‘likes’ on their Facebook Fan Page. Their Twitter is all but non existent, and they’re not yet on Pinterest, which is an ideal platform for a boutique furniture store with its own designers on staff. Here’s hoping they’ll soon create a full time web marketing position that could include all of that and advertising, or at least farm that work out to a local PR operation. Su Casa and Pad are definitely worth the drive for potential customers in PA or Virginia, but those customers might never know that judging by the internet.

So, after all that you’re probably wondering just what kind of sofa we ended up with. Well, you’re just going to have to wait a little longer. Our selections have been made, and we’ll put them up online next Saturday in the next installment of The Couch Chronicles…