Last week, we made the grand announcement that we are finally ready to furnish our living room. We’ve lived in the Chophouse for two and a half years now, and haven’t got one single piece of furniture in the house’s main space. Right now it serves as a bicycle garage, which is hardly suitable for a full grown adult homeowner, and is certainly not going to impress any dates we may bring home. We need help.

Fortunately, we’re getting some help from Su Casa in Fell’s Point. We’ve entered their Test it, Blog it, Win it contest, and that’s exactly what we aim to do. Basically, they let us pick out a sofa to live with for a month, and while we’re sitting on that sofa we blog about what it’s like to sit on a Su Casa sofa. Very meta, yes? If we win, we keep the couch for free and if not, we buy it for 50% off retail. It’s a pretty sweet deal because as you can see, we need a lot of furniture. 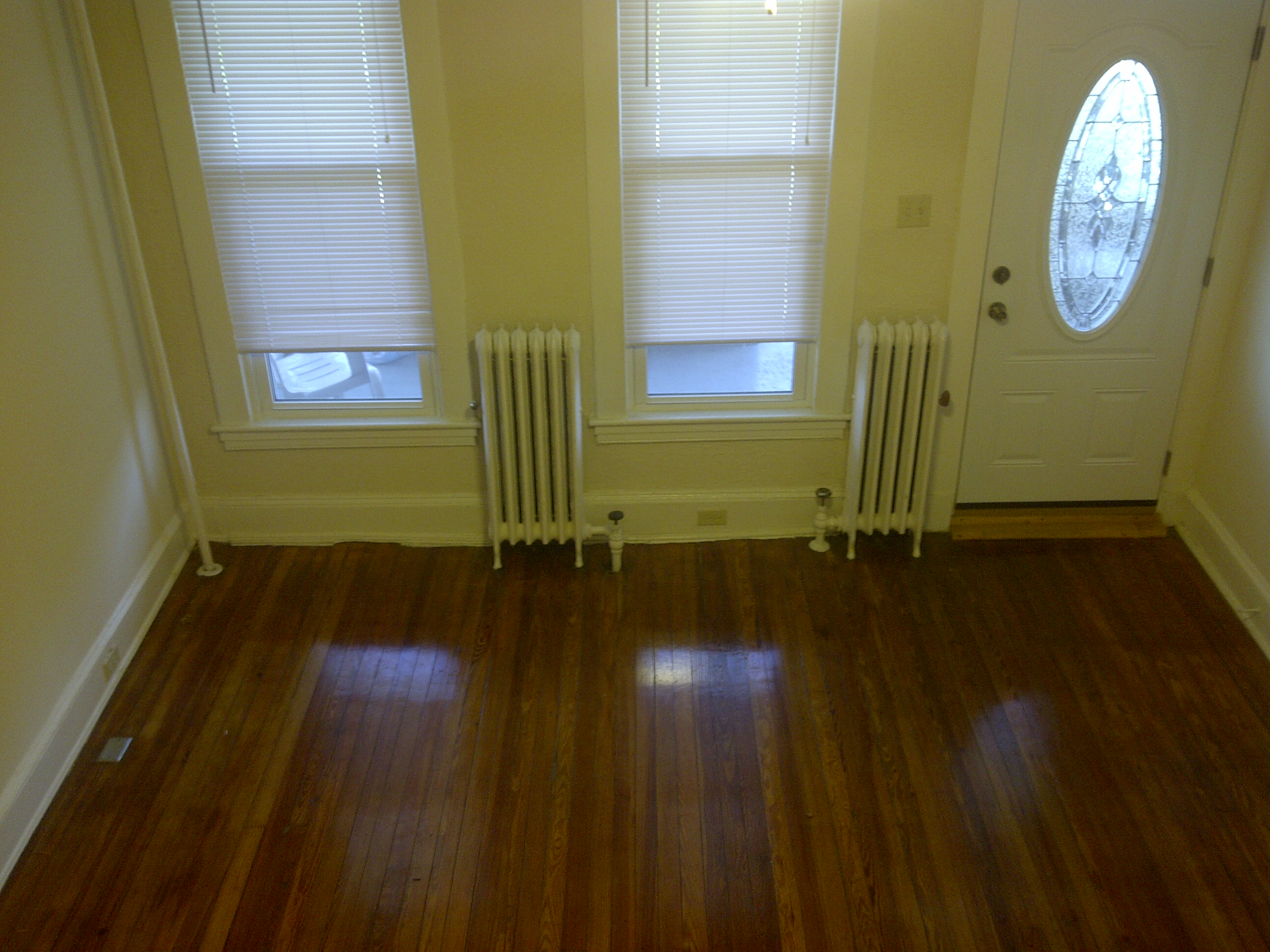 We’re already pretty deep into the whole design and purchasing process, but we’re going to wait a bit to give you the details. Today is all about the Before pictures. So let’s start at the beginning: here are some pictures of before the Before, from the MRIS listing on the house in 2009… 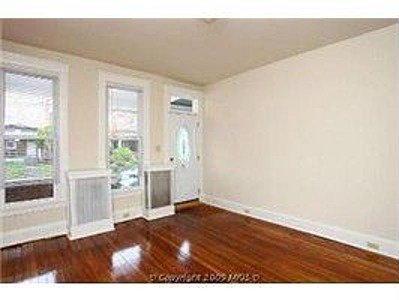 The absolute first thing we did was to tear out those radiator covers. They were cheaply made and ugly and were magnets for piles of junk. The radiators were whitewashed underneath and have a ton of character on their own. Plus, they work better and more efficiently when they’re fully exposed. Here are some corresponding views taken this week. (The camera in our Blackberry is making us wonder if we should invest in a real camera for this.) 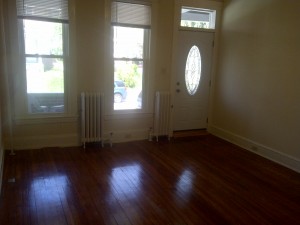 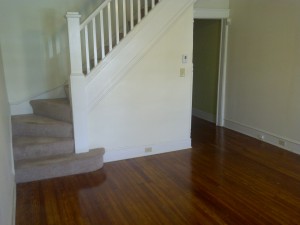 As you can see, we’ve made absolutely zero progress in the last 30 months. Well, not quite zero. We’re trying to do everything in a sensible order; we don’t want to put in five or more pieces of furniture and then have to move everything out to paint. One thing we were able to get a head start on was ripping out the bargain basement light fixture that came with the house and buy and install a pretty good quality ceiling fan.

When we bought the house, there was one of these in every room. 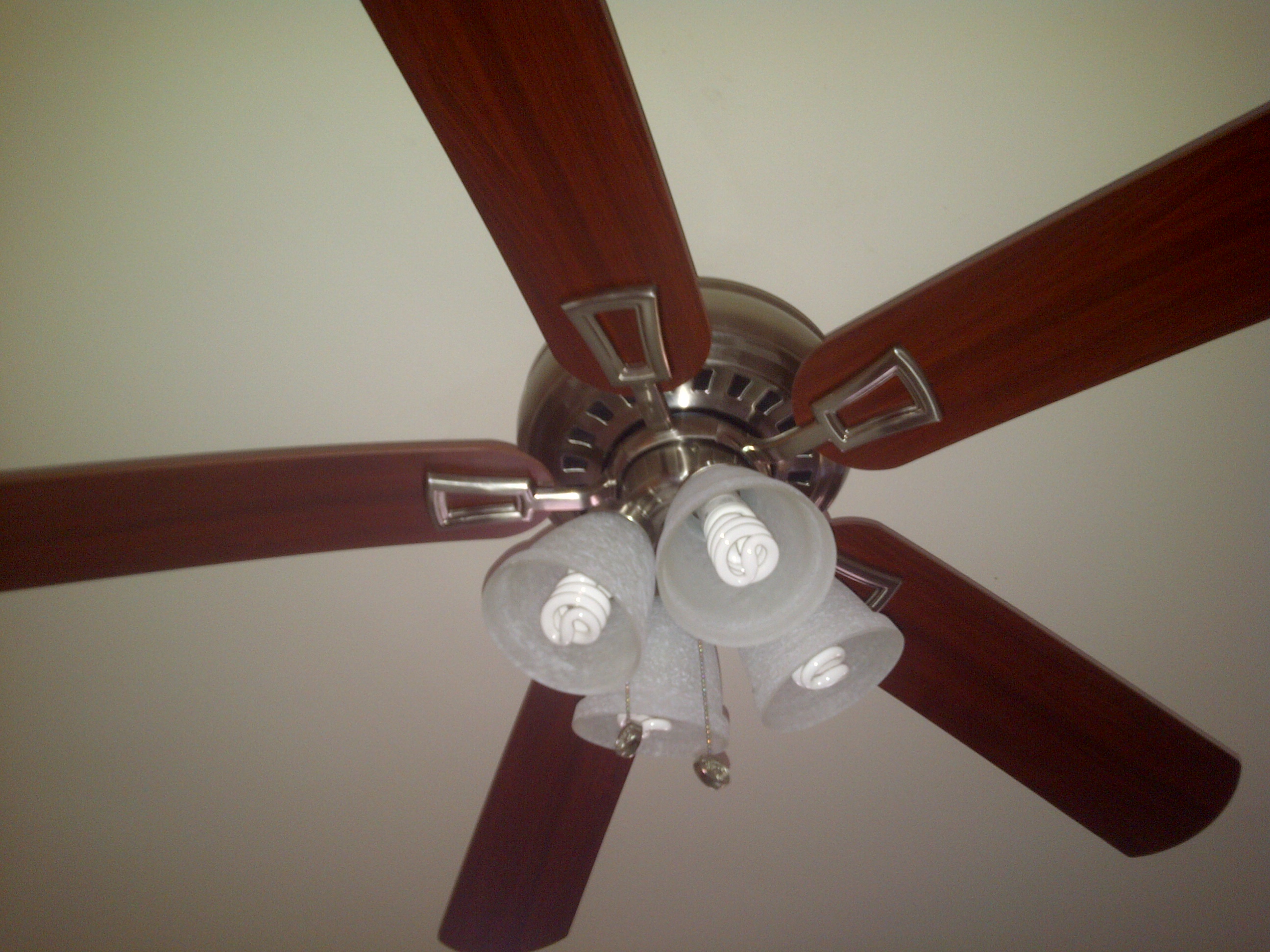 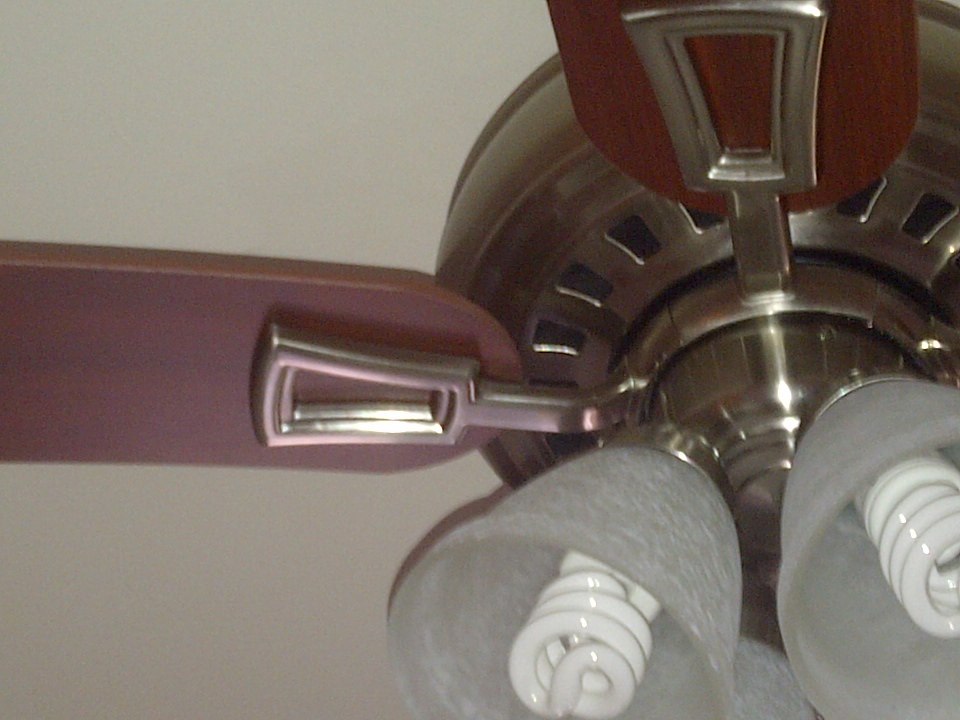 The steel body and frosted glass bells look a bit more expensive than they were.

Without central air, having a fan is going to be a big help to augment the window unit that will be in during the Summer. We’re hoping that on some days with our Northern exposure it will even be cool enough just on its own. The lighting itself is also a huge upgrade, being several times brighter than the old fixture.

So that’s where we’re at right now. We’ll update our progress next Saturday, and we should have the whole space painted by then. You’re not going to believe what color we’ve chosen…

Update: If you’re reading this the day it’s posted, Saturday March 31, you should also know that Su Casa just announced two days ago that they’re having a yard sale at their Fell’s Point location tomorrow morning from 8-10 am. They’re doing a little Spring cleaning at their warehouse, and will be selling off small decor and housewares items very cheaply. If you’ve ever walked around their store and wished you could buy up everything you saw (and who hasn’t?) tomorrow is a golden opportunity. We’re definitely going to stop by and see if we can snag some ‘finishing touch’ type items (which aren’t really in the budget anyway).