This isn’t really a post on how to buy jeans. You’re a grown man, right? You know how to buy jeans already. At least you should. It’s not that hard; you just go to the store and try them on and pay for them. The only way you can really fuck it up too badly is to just have horrible taste in the first place and end up with some dad jeans or something that says Ed Hardy on it. You can even get an okay pair of jeans at Target for under $30. Not the best, but fine for most. If you’re in the Levi’s Store or the Gap you almost can’t go wrong.

We could write a very long and detailed post about the intricacies of buying jeans. Straight leg, boot cut, mid-rise, selvage, etc etc. There are a ton of blogs and websites and message boards that deal exclusively with the denim subculture. There are even “artisans” in Brooklyn who will be happy to take a four digit sum out of your bank account to make you a “one-of-a-kind” “bespoke” pair of jeans. This post isn’t about any of that because that’s all stupid and boring. 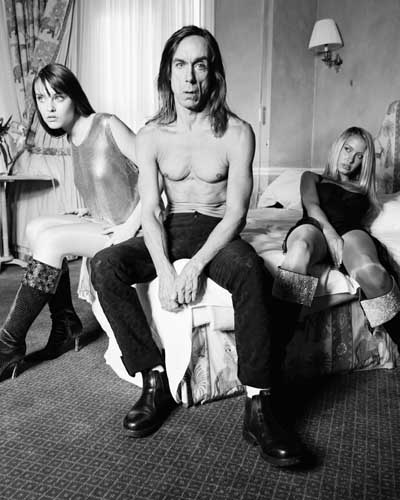 Sometimes a good pair of jeans is all you need. Especially if your name is Iggy Pop.

The point of this post, like all well-written blog posts, is to transmit exactly one good idea to the reader. Here is that idea: You should buy one brand new pair of decent quality jeans every year, preferably in the Spring. You should do this whether you think you need to or not. These are meant to be your everyday pants. They’re the pair you throw on when you get home from work and the one thing you don’t think too much about when you’re going out. They’ll take you almost everywhere you go, and take all the wear and misuse and punishment you can dish out.

Personally, we’re big on the whole jacket and jeans thing, and have even been know to wear a tie casually over denim. If you’re going to do stuff like that, it’s important that your jeans stay crisp and clean. Fraying and wear can take that style outside the realm of a cohesive look and make it appear as though you’ve just thrown a blazer over your laundromat outfit because you were cold. See exhibit A.

Even if you’re more casual than that, your jeans still aren’t as nice as you think they are, just by virtue of being everyday pants. Wear and washing patterns and dirt and the detritus of skin all conspire to slowly ruin your jeans, but you spend so much time in them you’re likely the last to notice. It’s kind of like not smelling the cigarette smoke in your clothes until after you leave the party. If you’re not careful, you can end up as one of those guys whose wife or girlfriend is bitching about how he wears his ratty old jeans everywhere and is trying to drag him to Men’s Wearhouse for khakis. And you don’t want to end up in Men’s Wearhouse khakis, do you?

Our birthday happens to fall at the first week of March, so every year we set aside $75 to $100 to treat ourselves to a new pair of jeans. This year it’s a slim, dark pair from Express with a zipper fly (and you gotta go for the zipper, because when you’re at the bar as often as we are buttons just won’t do). We suggest you think back to the last time you bought jeans, and if it’s been a while, get yourself to the store this month.