Update: Sonar is closed and now that Station North is Saving the City this lot is no longer free parking.

It’s kind of ironic that we’re writing a post about parking now that we’ve resolved to give up our car, but there are two changes in parking at places we go regularly that are worth noting for the rest of you who still have cars.

The first change we noticed was in Station North, at the lot on the corner of 20th and Howard Street. This lot is kind of a minor urban miracle in that it functions as a free community lot where people can park day or night without fear of being towed. A lot of people are quick to denigrate the presence of parking lots, but when they’re free and open to all they’re very much a valuable community resource.

Now, we’ve been parking in this lot for years, and we’ve always kind of wondered who owns it and why they allow free parking, but we never thought it wise to look the free-parking gift horse in the mouth since we’ve never been ticketed, towed, or broken into there. 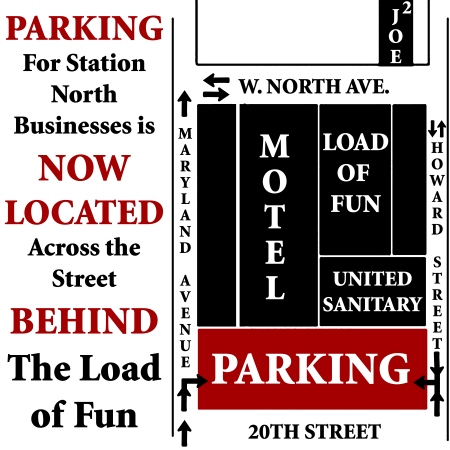 In this image, South is up.

The only difference now is that when we went to Joe Squared last week there was a large poster board with the above graphic lashed to the fence next to the patio. We can only take this to mean that parking in this lot is pretty legit for patrons of all Station North businesses. Who says there’s no such thing as free parking? Now all we gotta do is pass Go and get our $200.

The other parking change is much more substantial and will be of interest to anyone attending shows at Sonar or other clubs near the foot of the JFX.

We’ve always just parked on the street when going to Sonar, Sidebar, etc, since there’s generally not any shortage of street parking near City Hall at night. Going to the Shellac show though, the weather was rainy and since our driver’s side window has been reduced to a pile of Baltimore Diamonds we were looking for sheltered parking.

As it turned out, we were in luck. We’d noticed on Sonar’s website that this show’s listing said parking would be available in the garage above the club for $2. We had always know that there was a garage on top, but had no idea that it was available for show-goers. Not only that, but when we pulled in, there was no one there to take our money. The parking was free.

When we asked the club staff about it at the door, they advised us that nighttime parking in the Farmers’ Market lot under the JFX now costs seven dollars ($7!). They also said that from now on, Sonar patrons can park above the club either for free, or for some rate which will be less than $7.00 depending on the show.

If you zoom in on the embedded map, Sonar itself looks like a parking lot. There are 2 levels of parking on the building, a covered garage, and the exposed rooftop. you can access both levels from Gay Street, passing the church and making a hard left right behind the billboards.

Have any downtown parking tips of your own? Feel free to share them in the comments.