One of the best things about living in Baltimore, and perhaps the major reason we love it so dearly, is the ability to go from something very highbrow and sophisticated to something decidedly lowbrow with absolutely no transition in between.

That’s exactly how our night looks to be shaping up tomorrow, when we’ll be going directly from one of the BMA’s “late night” parties over to the Golden West for an actual late night party. There’s 2 to 1 odds that the phrase “Oh you think you fancy, huh?” will come into play at some point tomorrow. 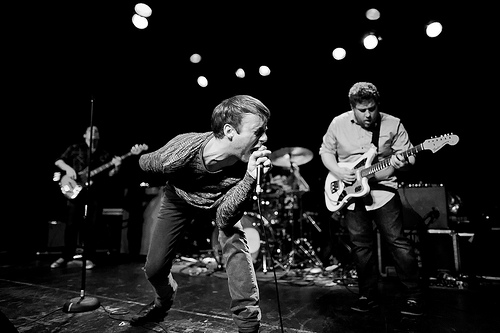 If you haven’t been to one of the Baltimore Museum of Art’s late night events yet, you’re absolutely missing out on one of the best things in all of Baltimore. The museum has been throwing Saturday night parties at the close of each of its special exhibitions recently, and each one has been bigger and more fun than the last with food, music, cash bar, and free or very cheap admission. Tomorrow’s event is free, and will have a distinctly Baltimorean feel to it as it marks the closing of the Baker Artist Awards exhibit.

This year’s winners were, of course, Gary Kachadourian, Audrey Chen, and Shodekeh, who will be joined by several more familiar names including Ellen Cherry, Justin Sirois, and the Copycat Theater.

But we can only pretend to be rich and classy and sophisticated for so long. By the time this party is over we’ll be more than ready to hie to the Golden West for Sub Pop’s Pissed Jeans. What’s Pissed Jeans? It’s a big dirty dick that fucks you in the ear. It’s the kind of band that makes beer drip from the ceiling and nice things get broken. It’s the sound of America falling apart at the seams.