We’ve never been very big into the Queers. There was a point in time, early high school, when we should have been a huge Queers fan. It was all there on paper: they’ve got songs about drinking, girls, farts, pranks, the suburbs, hating school, etc, etc. When we were a 15 year old suburban terror getting kicked out of the mall, engaging in minor vandalism, trying to make out with girls in parking lots and being as misanthropic as we could before curfew we should have been really into the Queers.

We never were though. Every time someone mentioned the Queers, it was just a reminder to listen to some other band. The Dead Milkmen, NOFX, Screeching Weasel… we liked a lot of bands better than the Queers. That said, it’s not like we don’t like them at all, and these days there’s a distinct lack of lighthearted pop punk goofball music in our collection. The Queers are at least better than watching TV, and for $12 at the Black Cat backstage, it’s hard not to want to go. 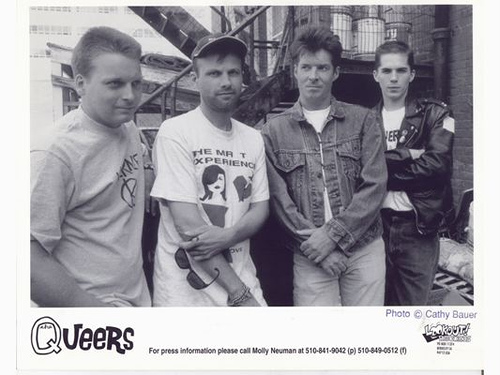 Opening up tonight is Baltimore garage/punk supergroup Sick Sick Birds who we’ve recommended a bunch of times before, and who have recently been in the studio recording some new stuff. Presumably, they will be playing some of said new stuff, so if you can’t make it to DC tonight you should at least come out to their next show this Saturday at Metro Gallery. According to that link, it’s their last one before Melissa goes on maternity leave from the band. Yeah. That’s a thing that old punks do apparently. Welcome to the new reality.

Also playing tonight are Dutch punk rockers The Apers who are touring with the Queers, as well as being their Asian Man Records label-mates. These guys are another punk band that sounds fourteen and looks 40, so they ought to fit right in. Hide your patches, hide your spikes, AND hide your Docs. At the Black Cat tonight they’re punking errybody.