Why is it that sometimes the best bands are also the laziest? We don’t mean to call anyone lazy, especially since we pretty much take the cake for sloth in this town, but we can’t help but notice that sometimes those with the most talent do relatively little with it. Consider the scant output by writers like JD Salinger and John Kennedy Toole, or the recent careers of local bands like Landspeedrecord! and Poly/Western.

Granted: LSR put out a shitload of records, and was no slouch back in the day, but since they got back together they’ve played out only occasionally, and seem to be doing things just for the fun of it (not that there’s a damn thing wrong with that). We already told you how cool they are back in May, so we won’t waste words here telling you again. They’re still cool, okay? 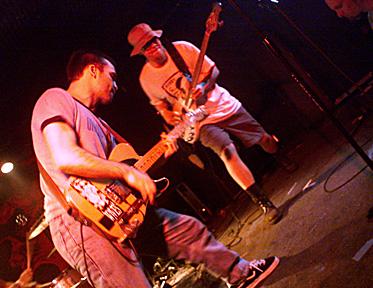 Poly/Western is also a sort of groundhog of local music. Every now and again they’ll pop up and play a show, see their shadow or not, and go back underground for as long as suits them. If they were to start playing and traveling regularly though, or maybe even release a record, we think they could really be a band to watch for 2011. They’ve got that slow, full, ambient feel while still staying true to pop/rock song structures that we’ve begun referring to as the Baltimore Sound, and they do it a lot better than many bands who seem to work a lot harder than they do. On this blog, we try to give you a heads up for what you can expect at local shows, but rarely can we do it with such precision so easily. Here’s a youtube video of Poly/Western playing at the Metro Gallery. In other words, it’s pretty much exactly what you can expect to see tomorrow.

Joining in on the fun are a couple of bands who play a lot more often around town, Thee Lexington Arrows and The Matrimonials. Both are worth watching, and for $8 at a bar that stocks cheap Löwenbräus, this is our idea of nightlife.