As you’re beginning to figure out, The Baltimore Chop is always on top of its game. We do what the hell we say we’re going to do, and when we say we’ll do it. Of course, our timing is always impeccable, and our attention to detail unimpeachable.

So we’re very disappointed when others fail to meet their obligations. We’re not one to lose our cool, but we are highly vexed by those of you (and you know goddamn well who you are) who wait until Friday afternoon to contact the parties with whom you do business, and say in effect:

‘Oh, remember that thing you were depending on me for? Well, I didn’t get around to it, and I need something else from you, and by the way I’m already mentally checked out since I’m leaving the office early today and going away for the weekend and probably taking a ‘personal day’ on Monday.’

This is entirely unacceptable. Don’t do this.

It seems the Chop has been running into these sort of people Every Friday since about the beginning of the recession, when everyone basically stopped caring and was paralyzed by fear. This Friday in particular, its the sales staff at Value City Furniture in White Marsh, who failed to deliver the sofa we had ordered. Normally this would be a mere minor detail, except that the Chop had already arranged for the Louisville Slugger to come all the way from the New York City this weekend, and we had offered him a couch on which to sleep. We won’t have our friends laid out on hardwood floors.

In related news, the Chop had a second date tonight with a very charming young lady whose father had the ill-manners and poor timing to have himself a small heart attack or some such thing, and managed to land himself in a Pennsylvania hospital. Needless to say the date is canceled, and probably wouldn’t be much fun if it happened under those circumstances anyway. We wish our (very remotely possibly) future father in law a quick and comfortable convalescence.

So while we’re tempted to do the call-around, The Chop is going to take this as a good excuse for some quality ass-to-seat time in our new armchairs (which actually were delivered), and probably make our way into Hampden for Bar Bacon Comedy IX at the Golden West. 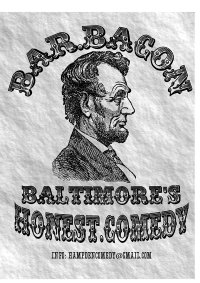 The Chop feels like we might well be behind the curve having let eight of these things go by, especially since we’ve heard nothing but good things. Jimmy “Valentine” Meyer even won a Best of Baltimore award for best comedy night, although the competition probably wasn’t all that stiff. Still and all, that’s even more reason to respect and support something like Bar Bacon. Any asshole can pick up a guitar and form a band, but there are far too few people willing to try their hand at comedy, and to give it the treatment deserved by the serious art form that it is. So the Chop is excited to finally hear the Bacon for ourselves, and we hope Meyer will keep cracking wise for a good long time, inspiring others to do likewise.