You never can tell where the night will lead in Baltimore City. It can begin in one neighborhood with the best of intentions, and end someplace entirely different, and even unfamiliar. The Chop might well start out at some ritzy affair at the Engineers Club, and end the night swilling tequila and losing at pool to a Honduran in Upper Fells. Or we might not.

Last night was one such night.

The chop was enjoying our Bar Bacon when we received a text from one of our suburb-dwelling friends, who along with another friend had somehow found their way to the Taphouse in Canton. It was an odd choice, both for the Chop and the friends in question, but we felt it best to go down and have a pint, since the Chop has some upcoming travel plans which will be discussed in a future post. We won’t be around for a good little while.

The Taphouse is sort of odd. Its nothing more than a traditional East Baltimore corner bar, which has its roots in the old UK public houses. The strange part though is that almost every single patron in there was under thirty, but behaving like a much more mature crowd. It struck us how much the neighborhood has changed. It also made us a little grateful that places like Looney’s exist, because they filter out all of the sharts from the rest of the bars.

Although that’s not entirely true. As we came to know, our friends had come to the Taphouse and met up with two others… one of them was a super-chic chick rocking a little black dress with black leggings and natural grain cowboy boots and actually pulling it off. The other was the biggest shart in the place; a shitfaced hood-rat with Glen Burnie written all over him. An odd couple to say the least.

Sometimes its not all bad though. As we know from being personal friends with one town’s official town drunk, the following logic can often prevail in the drunken mind on a Friday night:

This is definitely a warning sign that AA is somewhere in the future. Its also a sign that you’re going to get bought drinks if you can stand being in proximity to this shart.

And stand it we did for several rounds. Eventually though, the Chop’s mind wandered back to our brand new and luxuriously comfortable armchair-and-ottoman combination and the frozen pizza in our freezer, and we made our excuses. It was at this point that Cowboy Boots (who had contributed little to the general conversation before this point) came squarely up to the Chop and started chatting us up about fashion.

Now, its to be understood that the Chop dresses better than you. Last night we stepped out in an ultra-casual off-white sport jacket over a light gray argyle sweater.

Our outfit broke many fashion rules at the same time, and to be quite honest, with it being Halloween, we wondered if we might not be taken for wearing a Don Johnson costume.

You can see why this is to be avoided at all costs. Anyway, it was nice to get a favorable opinion from someone as stylish as Cowboy Boots, and from there the conversation flowed quite naturally into ” Oh yeah, we should totally go out. Here’s my number.”

Now, the Chop does not approve of drunken driving. However, every Baltimorean worth his Old Bay knows that its well nigh impossible to get a DUI inside the city limits. You can even bend a fender and the cops can’t hardly be bothered to come to the scene. This shart from the Taphouse though… he managed to tear his entire bumper off on a guard rail, and as the chop found out via text message, was subsequently made to blow and hauled into Central Booking. 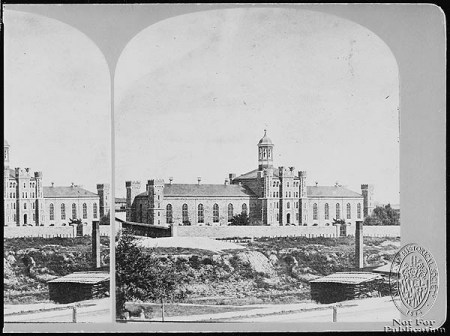 View of Baltimore City jail from where I-83 is today.

Of course, if you go to Jail on Friday night, there’s no way in hell you’re coming out before Monday morning, and possibly even Tuesday. Our man is about to see if he can survive a weekend locked in the house of horrors with murderers, rapists, and the city’s living dead.