If you want to find the Chop on the town tonight, then get thee down to Falvey Hall in MICA’s Brown center at 6:30 for the launch party of Lettering and Type, the new book on typographic design by Baltimore’s own Bruce Willen and Nolen Strals. the event kicks off with a reception (Free Booze) at six thirty, which will be followed by a presentation called Fan Letter, in which 26 artists and designers give presentations on their favorite typographic character. 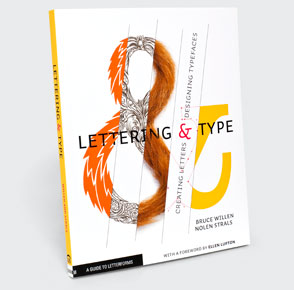 Some of you out there in town may already know Bruce and Nolen not as book authors but in their other incarnations both as Post Typography and as two thirds of Baltimore powerhouse Double Dagger, which has received much, and much deserved acclaim in its own right. But whether you’re familiar with these two or not, you may be asking yourself “Why should I make a point of going to the art school for some boring-ass lecture on typewriters? I saw ten minutes of Helvetica once and that shit put me straight to sleep.”

Well, aside from the free booze, here’s why you need to be there: this is a historic event, both for the world of design and for the city of Baltimore. The book making its debut here is absolutely going to become the new standard text in this field. Years from now your kids are going to be made to buy this as a textbook when they get into college. And many, many years hence when Nolen and Bruce are a-moulderin’ in their graves, the New York Times is going to publish their obits, with this as one of their signal accomplishments.

(Incidentally, if you want to know what typeface is carved into headstones, you can probably find it in the book.)

Its long been a dilemma that all this city is known for is Hons and Murder and John Waters. Well, these guys are to their field what John Waters is to film, and something else they have in common with Uncle John is that Nolen and Bruce both realize what a good thing they’ve got going in Baltimore. They deserve the admiration of all of us, because here are two people not chasing some flight of fancy to NYC or LA, but making their dreams a reality right here in Baltimore. This book will help to put Balto on the map, not only as a place where fonts are designed, but as a place where passionate people can follow their ambitions and make their dreams a reality.