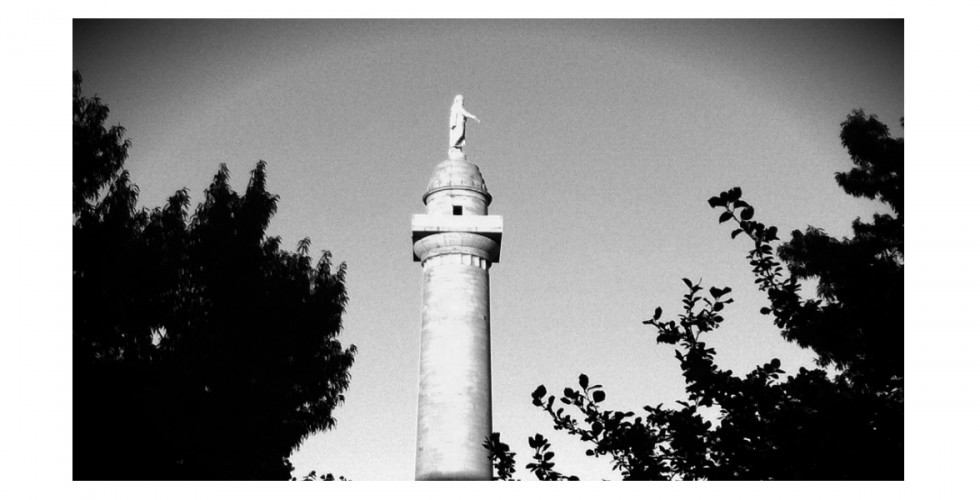 It was reported yesterday that a worker conducting the ongoing renovations at the Washington Monument discovered a 100 year old time capsule behind a plaque in the monument’s base.

There’s still no word on what’s inside the copper box. It’s being moved to the Walters Art Museum and hasn’t been unsealed yet. Some reports have mentioned old copies of the Sun, which seems like a pretty boring thing to put in a time capsule. Maybe they didn’t forsee the invention of microfilm or, you know, the Internet in 1915 but reading an old newspaper seems like something that modern man can do pretty much any time he’s so inclined.

It’s almost a certainty that The Walters or the Mount Vernon Place Conservancy or City Hall will make another time capsule and stick it right where they just found this one. They’d be blowing a nice little PR opportunity if they didn’t. So the question is what should they put in it? Here are a few suggestions from the Chop:

Beer. A mixed six pack from local breweries seems like an obvious choice. With craft brewing getting bigger and better all the time the inclusion of some popular flagship brews like Resurrection and Duckpin would be a good snapshot of what people are drinking these days, and beer bottles seem like they’d have a pretty good chance of surviving 100 years in a monument.

Records. Vinyl records probably wouldn’t be playable after sitting around for 100 years but they could document what’s going on right now. We’d recommend a mix of the dominant art-pop like Future Islands and Dan Deacon as well as a few solid Baltimore Club selections.

Orioles/Ravens Media Guides. Most fans never even see a media guide but they are like an encyclopaedia of a professional season. They list every fact and statistic about the players, team and stadium that you can possibly imagine.

Restaurant Menus. You can’t put a Chap’s Pit Beef sandwich in a time capsule for a century, but you could throw their menu in there along with some other important points on the food landscape like the Charleston, Aldo’s, or The Helmand. The last decade has seen a number of venerable longtime establishments close their doors and it’s almost certain that 100 years hence the dining scene will look quite different than it does today.

A Big Boyz Pen. They’re ubiquitous, and they’ll probably turn out to be an interesting anthropological item by 2115. Will the JFX and the Jail still stand by then as they do today? God, we hope not.

Photographs. After 50 or 100 years the most interesting pictures tend to be candid shots of nothing in particular. Portraits of people or photos of civic events are nice, but the ones that are really fascinating are just random snapshots of the streets that show what the buses and newspaper boxes and store signage looked like, or what people were wearing in a crowd or other minutiae like that. Some photos from neighborhoods around the city would be a good choice.

An Inner Harbor Visitors’ Guide. The Inner Harbor has changed a lot in the last 100 years, and as we begin to knock out the ugly Brutalist mistakes of the 1970′s it’s bound to change just as much in the next 100 years. A visitors’ guide would be a good snapshot of what’s around the wharves today from Pier 5 along the waterfront to Rash Field.

Under Armour Apparel. We’d suggest something that seems plain by today’s standards, with the UA logo and made of one of their signature fabrics. Under Armour has become one of the most important firms in the city in 2015 and as they continue to grow that importance can only increase.

A no-touch thermometer. If you were going to have your temperature taken 100 years ago they would have told you to bend over. A no-touch thermometer is a pretty neat and relatively inexpensive piece of current technology that most patients are familiar with. It’s also a symbol of the importance of the Healthcare sector, which has long replaced Steel as the dominant industry. This item should be accompanied by a bit of current literature on Johns Hopkins and University of Maryland hospitals.

Got any more suggestions? find us on Twitter @thbaltimorechop and let us know what you’d add.