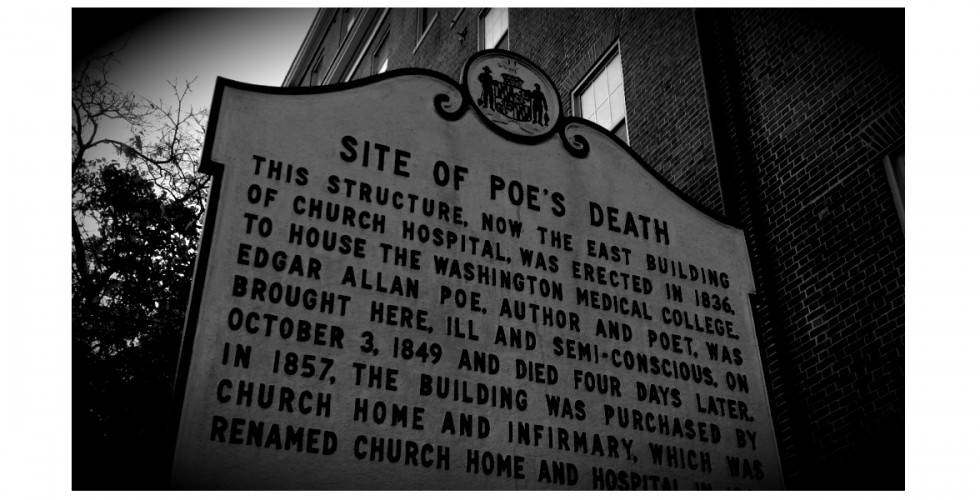 If you’re like us (and we’re like most of you, no doubt) you’ve never done a geo-caching adventure before. The first time we’d ever heard the term geo-caching was well before the smartphone age. The only people who were carrying around GPS devices were the kind of dirty hippies who have an REI charge card and think a week in a National Park sounds like a fun vacation. They were out there hiking around for 60 miles a day anyway so may as well make a game of it, right?

Being a city dweller we’ve always preferred bar crawls to geo-caching. If we want some outdoor time when the weather turns nice we can always change it up by drinking beer at a street festival or something, you know?

But the Geo-Poe project that went on throughout October was a Horse You Came In On of a different color. We could do it by bike and we wouldn’t have to go anywhere more remote than Leakin Park. (Oh who are we kidding we’re not even trying to go to Leakin Park.)

But strictly speaking the whole thing wasn’t really geo-caching was it? We didn’t actually need our phone’s GPS. As you can see on the event page it’s more of a scavenger hunt than a geo-caching thing. And some of those clues require a fair amount of Googling, even for someone pretty familiar with Baltimore. And since the page says that most of the stories have disappeared anyway, and since we’d rather hunt down thrift store finds than stories, and since we’re going to go hear the stories read by their authors tonight anyway we just kind of bicycled around to some of the sites and still haven’t actually done any geo-caching. More’s the pity.

But as we say the reading is tonight from 7-10 at Westminster Hall downtown, which is the site of Poe’s Grave. It features 14 very well respected writers reading stories that are somehow all connected to or inspired by Poe. We expect an interesting and lively crowd to turn out. It’s perfect for packing a flask of cognac, learning a bit about Baltimore history and getting spooked a bit before Halloween. Best of all, it’s free. You can register here, or if you can’t email us at thebaltimorechop@gmail.com and we’ll send you one of the extra tickets we ended up with.