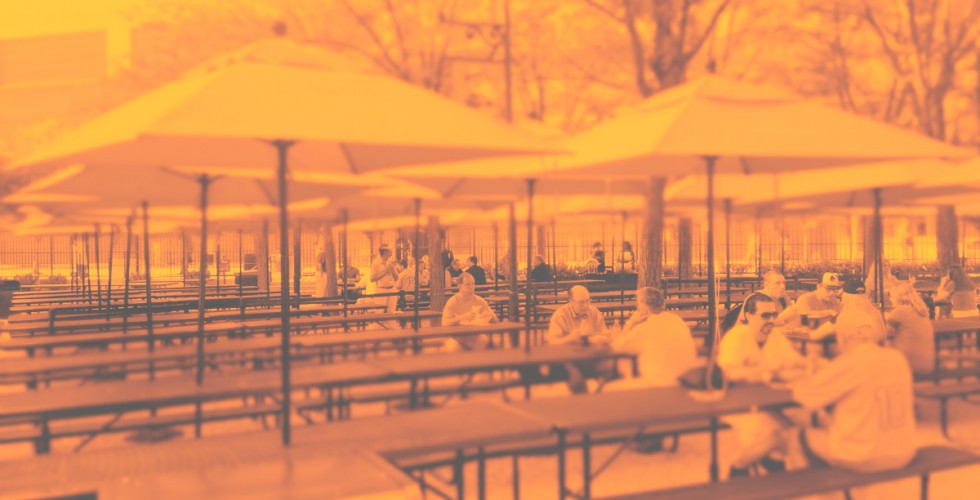 Late Summer is the worst of the worst times of year for home cooked meals. When it’s hot and humid out even the most fearless foodie would be crazy to spend hours in the kitchen producing additional heat from a stove and steam from a dishwasher. The only good options this time of year are to throw something on the grill or just have someone else make all your food.

Late Summer is also one of the best times of year for baseball, particularly when your team is more than twenty games over .500 and heading for the playoffs. The Orioles are in the midst of a long homestand right now, which means all the stars are aligned for a picnic at the park. Camden Yards features several outstanding picnic locations throughout the stadium, including the original dedicated picnic space behind the bullpens which seats several hundred at a time. The Chop has been taking a lot of meals at the ballpark lately, and since we can’t be bothered to make food at home and don’t like ballpark food very much, we’ve searched the city high and low to bring you some of the best options for picking up a pre-game dinner to take to the ball game.

A word about this list: There are a ton of places to get fast food near the stadium. The Inner Harbor is just down the street, after all. Additionally, there are scores of restaurants within a few miles of the stadium that offer carry out. What we present here is some of the best grab-and-go options from places not-too-far from Camden Yards for those who want to eat like a local.

Trinacria
111 W. Centre St.
It’s long been a cruel irony that the very best food near the stadium, Trinacria on Paca St, closes too long before game time (4:30) to make it a viable option. It’s only during the rare weekday-day-game that fans can pop in for a sandwich before walking down to the park. But Trinacria’s new location in Mount Vernon is open until 8:00, and is very near the light rail for easy access to the ballpark. Walk onto Eutaw St. with a roasted turkey tapenade sandwich or a porchetta panini and you’ll be turning heads in the line for Boog’s.

Milk and Honey
816 Cathedral St.
Milk and Honey is a great choice for lighter/more health conscious fare. Open 7 days a week their offerings include items like baked tofu, black bean hummus and the apple-manchego panini, as well as some more traditional offerings like roast beef sandwiches and Italian cold cuts. As a bonus it’s also a one-stop shop for gourmet late-inning snacks like handmade beef jerky, flavored nuts, popcorn, etc. They can even set up your group outing with brown bag lunches to go!

Italian Graffiti
1635 Fleet St.
Italian Graffiti made the top ten in the Chop’s Baltimore Pizza Power Rankings last year, but for purposes of quick lunch/carry out it’s got no rival. Carrying a whole pie into the park is definitely a power move that will make even pizza-snob Yankee fans jealous, especially if it’s one of IG’s originals like a Sfizio or Della Notte. For the less adventurous one of their calzones or wraps will have just as much flavor and be big enough to fill you up for days, but ought to be a little easier to get through the turnstiles. Pro tip: Circulator Orange Route to get from Fleet St. to the Yard.

Maria D’s
1016 Light St.
While there’s nothing particularly especial about Maria D’s, we can definitely say it fully deserves its reputation as a neighborhood mainstay in Federal Hill. Large menu, quick service, tasty food- even open late nights. They’ve got just about everything you want to please the palates of two or twenty people. We recommend going for something Mediterranean-inspired you can’t get inside the stadium: a gyro, falafel or slice of spanakopita.

Chicken Rico
55 Market Place
Currently available only in Highlandtown, we predict the currently still-sort-of-under-the-radar Chicken Rico is about to explode in popularity when they open their downtown location, possibly before the end of this baseball season. If you see downtown office workers wandering Pratt Street fighting off food comas,generous portions of char-broiled chicken, beans, rice, plantains and yucca fries in the under $10 range are sure to blame. Just like a dealer slinging the best product, once you get a taste for Peruvian chicken you’ve got to keep coming back to the source… buffalo wings and tenders just won’t cut it anymore.