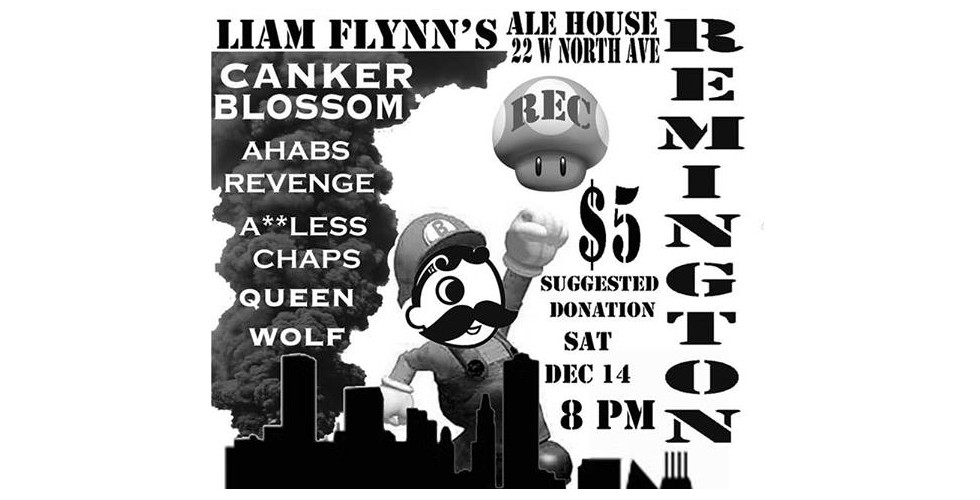 What is it? It’s a punk rock show. It’s our favorite kind of punk rock show, actually- the kind that takes place in a venue which doesn’t usually hold punk rock shows. In fact, the closest thing we can recall happening at Liam’s has been Punk Rock Karaoke. So it’s a good chance to go in there and not be at risk of hearing bagpipes and fifes or whatever.

Who is it? It’s the Assless Chaps. Baltimore’s very own chaps who lack asses. They’re the kind of band who makes $5 hats to put on their merch table. You know who needs five dollar hats? People who work for a living and want to keep the sun off their heads. Maybe we’ll get an Assless Chaps $5 hat and sail around the world with it, come back with it sun bleached and covered in paint and grease. They’re playing a holiday themed set, and you can be sure it’ll be more like old Fear than new Bad Religion.

Where and when is it? Liam Flynn’s Saturday at 8. Can’t you read fer Chrissakes?

Why is it? It’s a $5 at the door fundraiser for Power Up Remington. Here’s some copy somebody wrote about it:

“The Remington Empowerment Center is a transparent community space located at the corner of Huntingdon Avenue and Lorraine Avenue. The REC creates a venue that can be shared by many neighborhood organizations who lack a brick-and-mortar space. Our dream is to host meetings, workshops, art shows and small music events, as well as movie nights and game nights to bring the community together. We want to hear everyone’s voice on local culture, social justice, solving issues of access to food and affordable housing, and how we can ultimately make Remington’s voice heard in local politics. REC gives away free produce on Fridays starting at noon. We’ve given away over 1,000 pounds of donated food in three weeks.”

We’re not sure what that even means. It’s hard to tell from that if they’ve even got a building or are just in a lot or maybe somebody’s house. It’s hard to tell if it even existed before three weeks ago. Googling turns up nothing. ‘Workshops’ on ‘local culture and social justice’ can mean just about anything. But whatever. Anybody who’s doing any organizing in Remington who’s not Joan Floyd is A-OK with the Chop. So go to the show and give some money at the door.