We told you just a few weeks ago that the new Gallery 788 location in Hampden was an exciting addition to the Avenue, and that 788 has been one of the more vital and exciting galleries in the city for years. One of the reasons it stands out above most other galleries is that 788′s Eduardo Rodriguez really gets it. He gets what running a gallery and making it exciting is all about, which is Always Be Opening.

Much like this scene in Glengarry Glen Ross illustrates, the art game is fuck or walk. People don’t buy a painting off the wall if they’re not inside the gallery, and people don’t generally hang around in galleries unless there’s an opening, a closing, or live music. 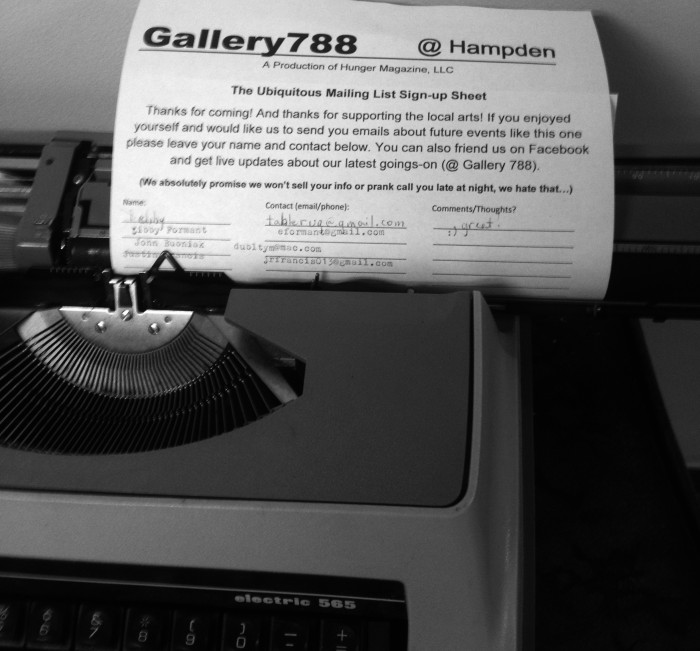 This week 788 is presenting all three and more.

The opening runs from 7-11 pm, which gives you plenty of time to stop by after the Charles Street monument lighting ceremony beforehand.

But that’s not all: always be opening means always. 788 Will be opening its doors again tomorrow evening to host a fundraiser for Baltimore’s own Housing Policy Watch (neé Baltimore Slumlord Watch). From that site:

“We’re having our first fundraising event, and we hope you’ll attend. It’s December 6 from 6 to 8 PM at Gallery 788. Tickets are $25, and this promises to be a fun cocktail party in a wonderful venue. You can buy tickets through Eventbrite via credit card — if you need to send a check, let me know!

Network, make new friends, or just stop by for a quick drink and bite before heading home. This is a fundraiser to support a local organization that’s working hard to make Baltimore a better place to live, work, and play — one vacant at a time. Get your tickets today!“

With all this opening we’re going to go ahead and give Erod the first ever Baltimore Chop Baltimore Person of the Year Award. Congrats, Erod. You get a Cadillac. Second prize goes to Carol Ott. Second prize is a set of steak knives.