Lately in Baltimore it’s been pretty tough to open a new bar or restaurant without drawing a lot of attention to yourself. As soon as your doors are open the fooderati are inside snapping up Instagrams of their dinners and Yelping their opinions all over the place. You might get a table visit from the chef or the manager… or maybe from the restaurant’s PR hack.

David’s 1st & 10 in Hampden is a different sort of place. It’s got a concept, sure. It’s a sports bar. But it doesn’t take that concept and try to add too much to it or completely reinvent it. It strives to do one thing really well, and that’s be a good place to drink beer and watch games. In that, it succeeds easily.

Now, there are some who would object. A lot of hardcore sports fans have a very set notion of what a sports bar should be- it should have massive TV’s and buy pay-per-view events and show UFC and have buckets of Miller Lite and wings and burgers and giant greasy nachos and pretty waitresses in short skirts. Memorabilia on the wall and Big Buck Hunter or Golden Tee in the corner. 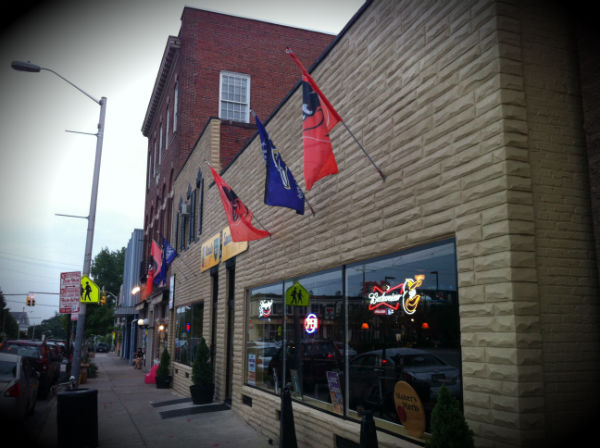 We disagree with that. If we wanted to go watch a game at Hooters or Buffalo Wild Wings then by God we would. But putting down a Buffalo Wild Wings clone in Hampden would make about as much sense as opening up a Rocket to Venus in Owings Mills.

For a city that is a decently respectable sports town, with a Super Bowl champion football team and a playoff baseball team, Baltimore as a whole does lack something in the department of true dedicated sports bars. We would posit that this is because the city is so full of ‘neighborhood’ bars (which also show sports, of course) that the whole idea is lost on our collective consciousness. Why seek out a sports bar when you can just as easily go to Swallow at the Hollow or Frazier’s or Captain Larry’s and enjoy the game with other fans?

At any rate, the addition of a sports bar is welcome, even one that breaks slightly from tradition as David’s does. The thing that most sets it apart from places mentioned above is its menu… which is full of food that’s actually good. Sure it’s got burgers and wings, but it’s also got an actual chef who’s designed a right-sized menu with options like tomato-basil soup, mussels in white wine sauce, and farfalle ala vodka. With the number of high quality restaurants now open in Hampden the choices for dinner are many and the neighborhood’s tastes have evolved. We think David’s menu is pitch perfect: delicious but not overly ambitious. Decent beers are $4. If you’re complaining about that then go drink at home.

Another difference between David’s and a typical sports bar is the distinct lack of memorabilia in the atmosphere. First time visitors may be baffled by the hand-painted sign out front and the crudely done portraits of local sports legends inside. It certainly looks as if they’ve skimped on decoration, but we’re hoping that’s due to the fact that the place is brand-new and can serve as a blank canvas in the future- filling up over the years with neighborhood softball trophies, Pimlico silks, and (dare to hope) a replica 2013 Orioles World Series trophy.

The atmosphere is also unique in that it allows a great amount of daylight before sunset. David’s entire front is made up of large plate glass windows and offers more window square footage than any bar we’ve ever seen anywhere. That’s not a bad thing though. It’s a lot easier to see out than in, and being right near a major intersection it’s kind of nice to sit and watch Hampden go by when you’re tired of SportsCenter.

But the real key to atmosphere is the people inside a place, and on every visit we’ve made the crowd in David’s has been very relaxed and content. It’s not strictly necessary for a sports bar to be pumping constantly with testosterone and red-bull shots. With every return visit we like the place more and more, and to us it’s the kind of bar that makes you want to hold your tab open and stay through extra innings. Final Verdict: 3 1/2 Cartoon Birds.