Sometimes when you’re a half-assed amateur blogger who writes about things on an as-they-happen basis there’s not much to do but tip your cap to a real professional staffed publication. You know, the kind that goes out and does real interviews and files and edits them and publishes them the day before the thing they’re about.

The folks over at the City Paper have already done a really good job of covering the two things we’re interested in in Baltimore tonight, so you might as well click over and read Jenna McLaughlin’s story on Baltimore Bike Party founder Tim Barnett.

” And the crowds are growing each month. Over 1,700 showed up in June for the 1980s-themed ride, and hundreds more are expected this month.

One might expect a loud, flashy, muscle-bound dude to be behind this epic fitness parade, but Barnett is none of those things. He’s humble when he talks about his creation, but the undertones of his grand plans sneak into his speech: Tim Barnett wants to unite Baltimore and he doesn’t care how he does it. “It just happens that bikes are the vessel we do it on,” he says.” …continue reading.

This month’s route doesn’t appear to be published yet, but according to an announcement on its site, Bike Party will now begin at Pearlstone Park (at Mt. Royal Station on Mount Royal Avenue.) The group has grown too large for the Washington Monument and will leave from this location from now on. This month’s ride ends at Wyman Park Dell. 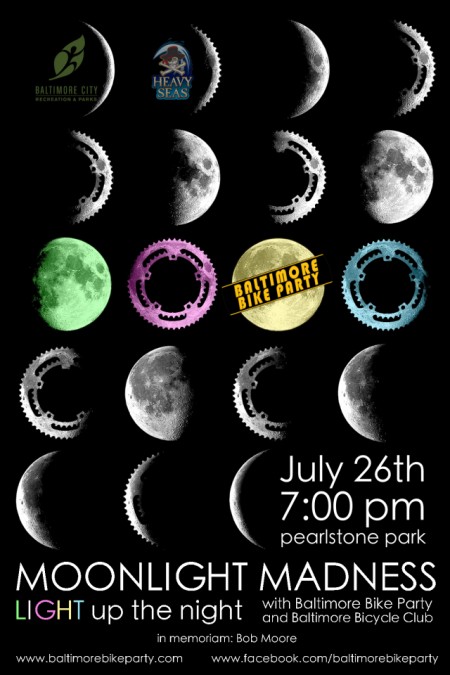 For the non-cyclists out there we’d suggest you read up on and then go to see The Human Host Movie. From City Paper’s Bret McCabe:

“Since 2002 [Mike] Apichella—best known to a segment of East Coast hardcore as the vocalist/de facto leader of the Charm City Suicides from 1997 to 2002—has appeared onstage as Human Host, the amorphous, genre-defying exploration of multimedia music performance.

Last year Apichella completed a five-year movie project inspired by his experience in Human Host. Titled The Human Host Movie, it’s an episodic, low-budget plunge into the sort of musical freakouts the band orchestrates onstage and records. Imagine Holy Mountain crossing streams with Don’t Look Back on the sort of budget that produced the Butthole Surfers’ VHS home movie-qua-concert film in 1985. It makes its local debut this week.” …continue reading.

Personally we have a fond remembrance of seeing Charm City Suicides/Human Host throughout the early 2000′s, and have nothing but nice things to say about Mike Apichella, So we’re going to make every effort to do both.