We’re coming into one of the worst times of the year for news junkies and political watchers. We’re just a few weeks away from congress’ annual August recess when nothing at all happens in Washington. That’s not to say that anything has been happening in Washington with congress there. The House Republicans are still gripped with seizures at the thought of doing anything at all besides repealing Obamacare for a 40th time and restricting abortions.

The slowing to a crawl of the news cycle has begun about a month early this year with the coverage of the George Zimmerman trial. Now in its third week, cable news outlets have aired just about every single minute of the courtroom proceedings live. This was entertaining for about the first 10 minutes when the defense was saying ‘motherfucker’ gratuitously all over live TV, but even for people with a special interest in the case three full weeks of motions and testimony are bound to run into a monotonous drone. 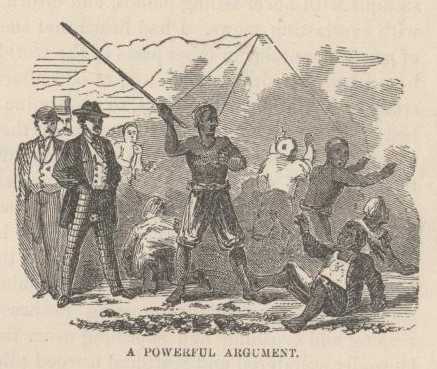 An illustration from Mark Twain’s The Innocents Abroad. Egypt hasn’t changed much since then.

The only other big story with legs this week has been the coup in Egypt. There are a lot of ‘Egypt experts’ with dubious qualifications getting ink and airtime in the media, and you can go ahead and add the Chop to the list of fake Egypt experts. After visiting on ships several times we’re confident in saying that those people just don’t have their shit together. Reporters and editors gave them way too much credit during the original Arab Spring because it was a great narrative. Democracy was going to flourish and everyone was going to live happily ever after and that was that. They desperately wanted it to be true.

But Egyptians have more in common with spoiled children than they do with, say, our founding fathers. The levels of corruption and greed and poverty and mistrust and sectarianism in that country are absolutely astounding. It would take a thousand Freuds a thousand years to analyze the Egyptian national inferiority complex. They’re still not over the Six Day War and they can’t stand the fact that Israel is a modern developed nation with a stronger military.

We hate the fact that we have to agree with John McCain about something, but we do believe that foreign aid funds to Egypt should be cut off because that’s what the law says. Personally we’ve got a lot of patience for handing out foreign aid and we see it not as charity but as something that it’s in our direct interest to do for selfish reasons, but the Rule of Law is not to be ignored. Obama already had a fake shitshow to deal with after Benghazi, and if he doesn’t call this coup a coup and follow the law he’s going to have a real shitshow to deal with. And he’ll deserve it because it’ll be his own fault.

Locally there’s a story here in Baltimore that probably should be sparking Tahrir-style street protests but is going barely noticed. The Baltimore Brew has been providing coverage that is both complete and concise. Long story short: the mayor has decided unilaterally (counting on the BOE votes of lackeys) to raise water bills by 42% over three years with no audit and without taking any action to collect millions in past due bills from giant industrial customers.

Stephanie Rawlings-Blake is absolutely the worst mayor in our lifetime or in the memory of anyone we know. We’ll definitely be volunteering and/or donating to anyone who lines up to run against her, but in the meantime she needs to get off her ass and go get those past-due industrial water bills paid and go get some fucking federal funds to rebuild the goddamn system.

Personally we’ve received erroneous water bills for hundreds of dollars which the city ‘investigated’ and found nothing odd about at all. Meanwhile they’ve torn up the street in front of the Chophouse twice in the last year and there was water leaking out of the sidewalk here just last week.

We may not be gathered with tents and torches at city hall plaza, but if you want to grouse about your water bill or anything else politics related come on out to Drinking Liberally tonight at Liam Flynn’s Ale House at 8 pm. Bi-weekly meetings are free to attend and open to liberals of all stripes. New participants are always welcome.