The first time we walked into the Crown one of the first thoughts that entered our head was ‘If we say anything online about this anywhere some dickhead is going to be all ‘Hey man why are you blowing up our spot? We’re like the top secret underground or whatever.’ Located in the Hyundai Plaza building at 1910 North Charles, the place had the distinct air of a modern speakeasy with no signage, no advertising, and an entry system by which people had to be buzzed in.

Since then though they’ve added some signage and we’ve heard them mentioned in places like WYPR, City Paper and Showspace so while it would seem they’re not deliberately shunning any kind of press attention the way WC Harlan’s was said to they’re still pretty firmly underground. (Harlan’s, for its part, has been written up by several outlets including the Sun and Baltimore Magazine and their address is easily searchable. They’ve even got a Facebook page.) 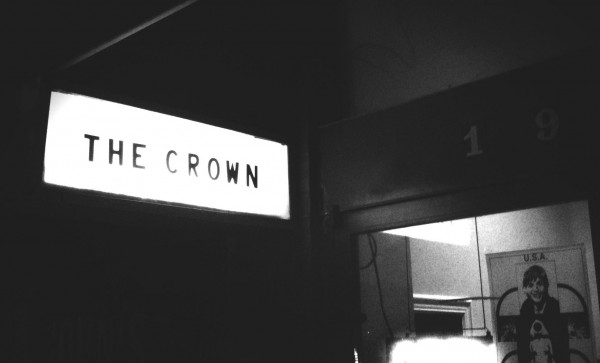 But we digress. The first time we walked into the Crown it felt like we were walking into a super-secret club made up of the creme de la creme of hip-creative Baltimore. There were a handful of people in there we recognized from various creative and community endeavors. We had just seen our bartender playing in a band the very same week. The place was also very brand new at that point which lent it a special sort of atmosphere. It’s a rare thing to be in a Baltimore bar that just sort of appears out of thin air.

And that’s pretty much what it did. The place has a weird cross-cultural vibe, being Korean owned but run by hip white kids. It’s the kind of place where young bands do cassette release shows, but there’s Korean karaoke playing on a monitor in the corner. They sell a lot of PBR and Boh, but Asian beers are available as well.

The Crown may be a new bar, but it certainly doesn’t have that new bar smell. The actual renovations done to the space are minimal, and the only things that seem new are the actual bar itself along with the back bar shelves and lighting above it. Things like draft and soda gun systems were not installed along with the bar. Everything else in the place is pretty well worn and frankly a bit worse for wear. The carpet is in particular want of updating and the lack of air conditioning makes the room fairly stifling on Summer nights the likes of which we’ve seen recently.

If you do the Truffle Shuffle they’ll buzz you right in.

The Crown’s secret weapon may be its kitchen though. We haven’t tried the food yet but we did watch as a friend tried and liked an order of fried dumplings. The menu is also a mashup of Asian and American choices, and although it’s small there’s a lot to like about it. By the time we’d made our second visit to the Crown, it seemed like the menu had changed entirely, so it appears to be a constantly rotating bill of fare. The food is very fairly priced and we could easily see the Crown becoming a go-to spot for a quick late-night bite.

Final Verdict- Overall we’re giving the Crown a two Oriole Bird review. We don’t want to say anything against it because it’s a great addition to the neighborhood and more bars is always better than less bars if you ask us. Honestly though we think the place is better suited to a younger and less discerning crowd. People over thirty are likely to find themselves migrating back down to Club Charles, Joe Squared, Windup or Liam’s.