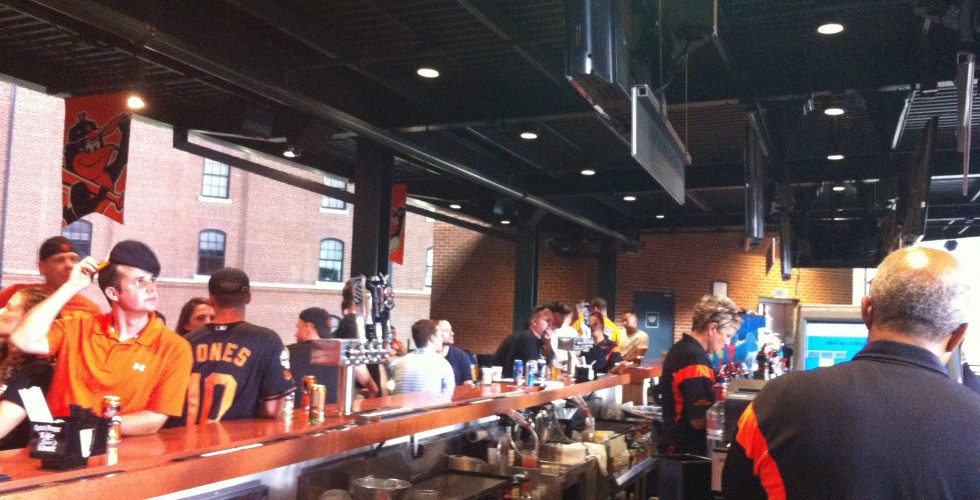 One of the most exciting features of Oriole Park at Camden Yards is the expansive center field roof deck and bar that was added during the renovations before the 2012 season. The bar area sits atop a building housing the also-recently added Gino’s Burgers & Chicken plus a suite of restrooms. It features more than 75 feet of bar length as well as several sofas and umbrellas for lounging, plus a row of rear-facing stools with a view of the downtown skyline. It’s an especially enjoyable spot to be during batting practice or a long rain delay (as most of it is also sheltered overhead).

The bar integrates seamlessly into the overall design of the park, and any out-of-town fan would likely be incredulous to learn that it hadn’t been there all along. But perhaps the part of it that’s drawn the most curiosity over the last season and a half is the two rows of bar stool seating that face the field and look over the batter’s eye wall. 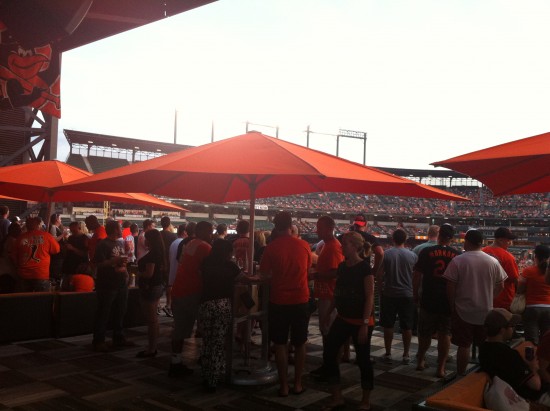 In 2012 these seats were available on a first come, first served basis. A fan with a ticket to any seat in the ballpark could choose to sit on a center field bar stool instead and watch a couple of innings or stay for the whole game. Likewise if fans got up and went back to their ticketed seats, they forfeited any claim to their bar stool and someone else would sit down quickly. There was some confusion about this at the time, as these seats were and are numbered, but that’s how it worked in 2012. If you wanted to sit in the CF bar, all you had to do was show up early.

For 2013 that policy has changed. Those two rows of bar stools are now ticketed seats for the game. This has also caused quite a bit of confusion and many people we’ve talked to this season, including Oriole fans that attend games regularly, were not aware of the change. The club has placed a rope-line behind the second row of stools, and ushers patrol the section quite strictly, providing a better experience for the ticket holders up there..

Bar stool tickets range from $25-$45 depending on the game, which is a fairly small premium when compared with center field bleacher seats. They actually come in at a lower price than seats in the left field club box sections which offer a similar view, especially from the back rows.

Actually all you have to do is walk up to the box office and ask for them. Even on game day. Even 30 minutes before first pitch, which is what we did for a game back in May. We liked the seats pretty well, but we were a little stiff after 9 innings since those stools sit relatively low to the ground and have no backs on them. You can also buy them online directly from the Orioles ticket page. We looked up tonight’s game against the Rangers and there were still seats available.

You’ve got to click this to find the bar stools.

You will NOT find them in the seat map screen that pops up and allows you to select individual seats from sections. However they are listed at the bottom of the section menu. It’s necessary to click on the little red ‘x’ that we’ve highlighted above and select from the menu, as pictured below. 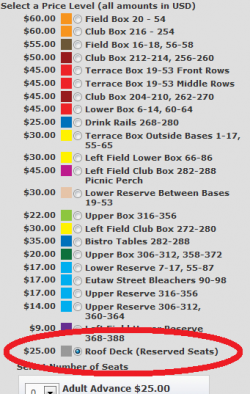 From there you just follow the prompts and buy them the same way you would with any other set of seats.

Perhaps it’s because of the confusion about policy from one season to the next, or perhaps it’s because the Orioles don’t generally advertise and promote these particular seats the way they do with things like student night or flex packs, but for whatever reason they are generally available and easy to get. We’ve been to several games this season in which this particular section didn’t even sell out which strikes us as odd, considering there are relatively few of these seats.

Also generally available are the ‘Drink Rail’ bar stools on the club level in left field. These stools are fitted with seat backs and are higher and more comfortable. They provide a much different experience because the drink rail is a lot quieter than center field, with no crowd behind you and only a small section in front and below. There’s a much better atmosphere for paying close attention to the minutiae of the game, and the rail is perfect for filling out a scorecard. The drink rail spans sections 268-280, which are our picks as some of the best seats in the house.

You can find drink rail seats on the list above and check the box, but unlike in center field you can also use the seat map to pick out specific stools and see what exact seats are available. Using the seat map we selected two seats in section 280 for tonight’s game against the Rangers, and the process looks like this: 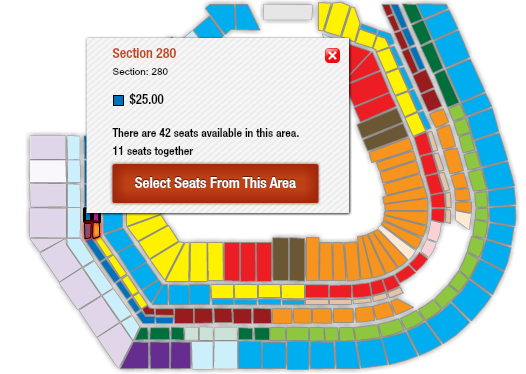 Select your desired section from the map.

Select the seats you want. There are 2 drink rails available in 280 for tonight’s game in this picture.

View your tickets and proceed with your order. ‘Row A’ signifies drink rail.

Bistro tables are also available through the online seat map.

So there you have it folks, a complete guide to the Oriole Park bar stools. We’ve got to admit we were hesitant about publishing this post, as this is one of those open secrets we’re sort of glad not many people seem to know about. In the end though these seats are a great feature, and can enhance the ball park experience for everyone.

But only if people actually buy them.