So no more Republican.

That was fun while it lasted but we split amicably and mutually after just a few months, which leaves your Chop in a frustrating and absurd position: the state of Passive Dating. For most of our life we believed Passive Dating was a fiction- a made up thing that people referred to out of convenience.

Of course, being perpetually single most of our life has been spent Actively Dating, so from our late teens and through most of our twenties we would often hear women say things like ‘I’m just kind of taking some time off right now.’ or ‘I’m really trying to focus on me for a while.’ And we didn’t buy it for a second.

Whenever we heard that kind of talk we always took it to really mean ‘I’m still way hung up on my ex-boyfriend.’ or worse ‘I’m just not that into you.’ and to be sure, most of the time it did mean exactly that. But now that we’re well enough into our thirties, the idea of Passive Dating is starting to make a lot of sense. 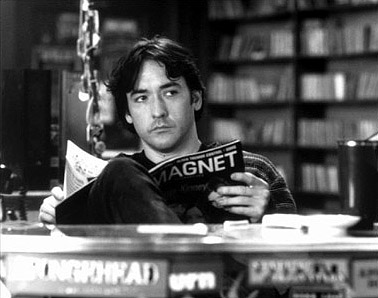 Not quite as sad as this bastard but we’re dating about as much.

So what is Passive Dating, anyway? Well, if we can extend the old ‘plenty of fish in the sea’ metaphor, Passive Dating is basically the equivalent of not casting a hook, but rather waiting for a fish to just jump up into the boat.

It’s been our experience that Dating Passively is actually pretty common over 30. When people say they’re focusing on their careers, they actually are. When they say they just got out of a serious relationship, they mean serious. Like living together or more. After 30, most people have a pretty good goddamned specific idea of what they want, and seeking it actively is a lot of work.

In our own situation, a big part of our Passivity is due to the fact that we’re trying to leave town for several months again pretty soon. It’s true that we just came home a few weeks ago, but we were looking for a quick turnaround and as soon as the Orioles got knocked out of the playoffs we were ready to pack our bags and go.

In the meantime we’re in the awkward position of knowing exactly what we want but not quite being able to pursue it. Even if by some stroke of Providence we were to meet the perfect person tomorrow and actually do something about it it would be bad timing, to say the least. What’s the point in having a great first date and then saying “Oh, I have to cancel our second date. I just found out I’m going to Diego Garcia for the next 4 months”?

Even dating for dating sake is something we just can’t trouble ourselves with at the moment. Short term dating can be a lot of work. Meeting people isn’t impossible or anything, but it is work, and a good date requires a bit of effort and planning and can run into money pretty quickly. Not to say we’d turn one down, but even in the 21st century, guys still do the asking.

So we end up in the ridiculous situation of shuffling through our usual haunts, inventing excuses to not even try to meet anyone. Forgoing flirting, ignoring openings, and generally staring at our shoes while our mind is someplace else in the world, wondering when the rest of us will make it there.