As you may know, we spent most of the summer working overseas, mostly in Bahrain and the Emirates. One of the highlights of our travels though was the couple of days we got to spend on the island of Diego Garcia.

For the unfamiliar, Diego Garcia is part of the British Indian Ocean Territory. It’s little more than the tiny outline of a footprint (literally, it’s footprint shaped) in a vast, vast ocean. The whole of the island is given over to a joint UK/US military base, and as such it’s not only one of the most remote, but one of the most unique inhabited places on earth. It didn’t take us very long to see that Diego has its very own culture, which is an odd mixture of naval regulation, British propriety, Filipino culture, and Margaritaville, which is wholly unlikely but highly functional. 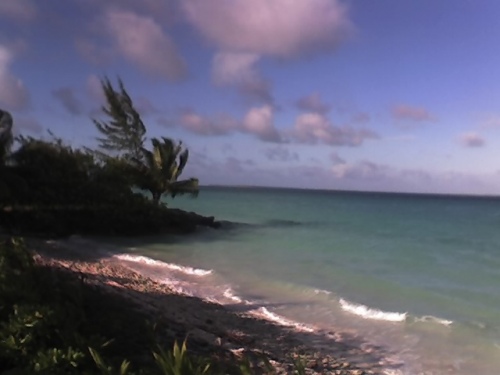 This is a pic from our crappy obsolete cell phone taken outside the Diego Garcia USS.

The island itself is literally a tropical paradise. It’s a ring of pure white sand surrounded by bright blue waters which are swim-able every day of the year and which provide some of the best sport and recreational fishing in the world. Exotic crabs scuttle everywhere, and coconuts fall to the sand and lie undisturbed long enough to split and sprout. You can literally see new trees growing out of coconuts.

As beautiful as is the island, most of its buildings are equally ugly. The architecture is as drab and uninspired as any other military installation. Most of them are little more than a box of cinder blocks with a number painted on the side. 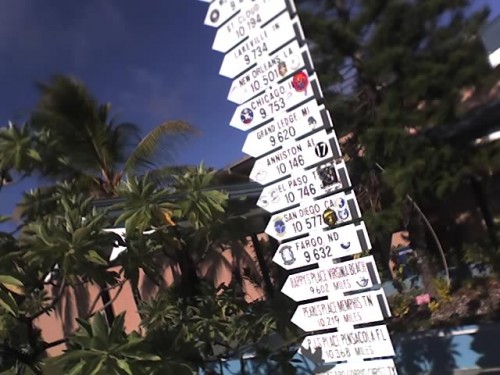 Outside the px downtown they have one of those mileage signs. Bottom line, you're a long way from anywhere.

A free bus line runs around the island, and will take you Downtown from any point on the road. Caution is necessary though, since a first time visitor may have a lot of trouble recognizing his destination as any sort of proper ‘downtown’. What passes for Downtown is just a few squat, nondescript buildings, not very close to each other. A hapless bus rider could easily miss it and see the bus turn around, and then miss his original stop again since the bus will not actually stop unless you yell “BUS STOP!” at the driver.

Once you get downtown though there actually is plenty to do, even if you can knock it all out in a day or two. There’s your choice of 4 different beach bars (although beach bars are less fun without any women around, but the drinks are surprisingly cheap), the Diego Museum, a couple of restaurants, the old sugar plantations and cemetery to tour, a bowling alley, paintball, a free movie theater, basketball, softball, etc. and of course, the fishing.

In fact, if we were to go there permanently and attempt to write a daily events blog, there’s be not shortage of material. The Navy has something planned for every day of the month, boat races, volleyball tournaments, dominoes, organized tennis, and so on.

Still and all though, we’re glad we got to see Diego the way we did… in 2 days. It’s the sort of tiny little town where once you’re bored with it, you’re really, really bored.