On Tuesday in this space we publicly proclaimed our love of Fall. But there’s a whole lot more to love about Autumn than just stylish scarves- namely Baltimore Beer Week.

Even though October is the time of year we double down on boxed wine here at the Chophouse, we’re sure to be tempted to sample a few brews throughout the week. There are literally hundreds of beer related events going on this week, and we couldn’t begin to list them all. What we can do though is pick favorites. Here are your best bets for beer week day by day… 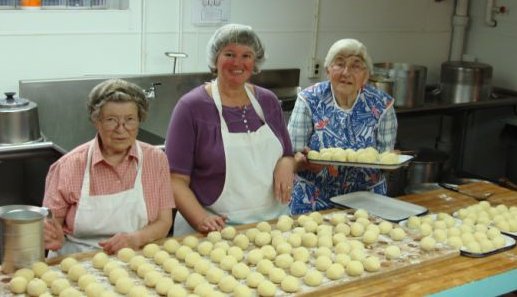 The Ladies of Zion Church will be cooking up sour beef and dumplings for Wednesday’s Beer Hall and dinner.

Friday, October 19 (Tonight)
Opening Tap Ceremony Afterparty
Of course, you don’t want to miss the opening ceremonies, but if you can’t make it by six o’clock or you’re unsure about laying out $30 for a ticket, fear not- the party goes all night. While the ceremonies officially end at 9 pm, Leinenkugel’s Beer Garden will be hosting an afterparty for the rest of the night. While the tasters go away, the drinkers are there to stay.

Sunday, October 21
Pancakes and Pumpkin Ale
You like Sunday brunch, right? Of course you do. You like it when everything tastes like pumpkins right? Yep. The Point in Fell’s is offering pumpkin pancakes paired with Schlafly Pumpkin Ale for only $14, and just in case you’re as lazy as we are they’ll be serving cakes till 4 pm. You’ll also be well positioned to hit up other more football-centric Beer Week events in Fell’s/Canton.

Monday, October 22
Craft Beer Bottle Day
Many bars have specials, but few specials are actually special. Alonso’s wins the day today with one of the best specials we’ve seen in a while- $2.50 craft beer bottles all day. That’s almost 300 beers to choose from, and when they say all day they really mean it- 11:30 am until last call. Great for daydrinking or a long happy hour and an absolute must if you’re out to watch Monday Night Football. Come out and try everything you’ve been meaning to try but haven’t yet.

Tuesday, October 23
Guess Your Beer- Get Your Beer
Canton’s Americana is featuring 4 mystery kegs on Tuesday, pouring from 4 unmarked taps. If you guess your beer, you get it for free. (Hey maybe keep a sharp ear out for the eavesdropping advantage too. It’s a bar, after all, and not Ben Stein’s isolation chamber.) Plus they’re also featuring ‘Warrior Wednesday’ (which actually runs from Tuesday-Thursday). Anyone who’s served in the military gets their first beer on the house. Both promotions run from 3 pm- Close.

Wednesday, October 24
Sauerbraten Dinner in Zion’s Aldersaal
Zion Church is one of the city’s oldest churches, located on Lexington Street adjacent to City Hall. Tonight they’re opening up their large church basement for a traditional sour beef dinner featuring dumplings, beets, green beans, and of course, beer. This is as old school as it gets and is always a unique and enjoyable experience. Dinner is $15 and beer is pay-as-you-go. There is also a dinner/ beer hall on Thursday.

Thursday October 25
Chicks Dig Beer (and dudes too)
This is a shitty name for an event. Especially since it’s not like a Ladies’ Night or anything. It makes no sense. Once you get past the name though, The Greene Turtle in Fell’s Point is offering all their beers at 2 for 1 from 7 pm- Close. Pretty tough to turn down. There’s also a wing special if you’re into that sort of thing.

Friday, October 26
Charitably Charming Chilibrew VI
You should probably go ahead and secure tickets to this now because it will definitely be crowded and probably sell out. The 2640 Space’s Chilibrew happens twice a year and benefits the Indypendent Reader, Whitelock Community Farm, and now the Baltimore Rock Opera Society. Not only is the chili homemade, but the beer is as well featuring some of the city’s best homebrews. Us vegetarians aren’t left out either, as there is a whole category and prize for veggie chili recipes.

Saturday, October 27
Beer Taps and Homebrew- Made in Baltimore
If you go east out Baltimore street about as far as you can go, you’ll run right into Mark Supik’s modest woodworking shop in the light industrial part of Highlandtown. It’s pretty unassuming from the outside. You might even drive right by it without noticing at all. Inside though they specialize in one very important product: tap handles. Tonight they’re opening the shop and displaying hundreds of handles in their tap museum. You can see taps being turned and even order a customized tap for your man cave keg. There will also be various homebrews available. Sip and spin.

Sunday, October 28
A Bar on Every Corner II Historical Walking Pub Tour
Alas, the final day is Sunday. But fear not! It is only the end of beer week and not the end of beer. Close out beer week with a bang by joining Beer Week’s second annual historical pub tour. A $40 ticket gets you samples and a buffet at Of Love and Regret, as well as beer at Elliot’s Pour House where the tour starts at 3 pm. It also includes a chance to drink beer on the roof of the Natty Boh Building which alone is worth the price of admission.