When we gave up our car a few months ago, we were afraid it might mean giving up the ability to keep our wine rack stocked regularly as well. Inasmuch as we don’t have the great good fortune to live right next door to a wine shop, it’s quite a task to carry home any more wine than can be enjoyed in a single night on a bicycle. Without wheels, our oenophilic options have been reduced to either having wine delivered by the case, or to trying to squeeze in a liquor store trip whenever we happen to have a Zipcar handy. That is, until last week.

Last week we bought our first box of wine for the Chophouse and instantly became a convert to the cult of the box. Like a lot of people, we’ve been going along under the impression that there’s not much more to boxed wine than the 5 liter Franzia white zins that Grandma would bring out for Saint Swithin’s Day. Times have changed though, and you can now choose from not only red, white, and blush in a box, but can select from region, grape variety, and sometimes even vintage year. 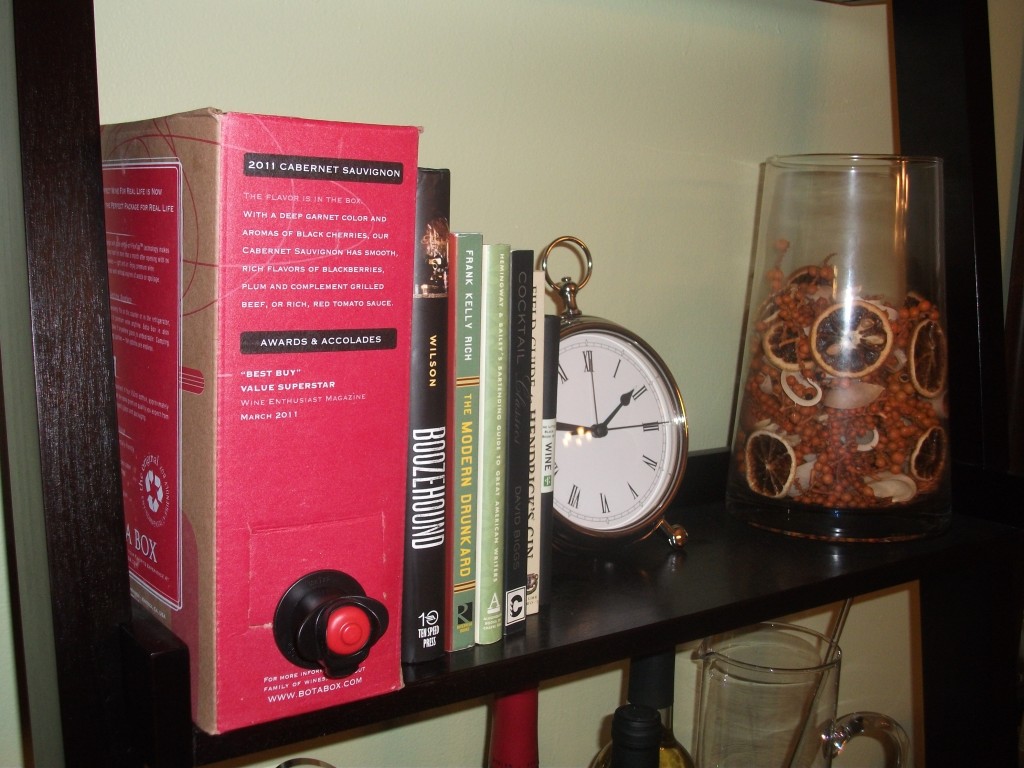 A Bota Box looks right at home on our wine rack.

We’re no wine snob. The truth is that we’ve enjoyed almost every bottle of wine we’ve ever had, and like an $8 bottle just as much as a $28 bottle. Our main objection to the box has mostly been aesthetic. As you can see in the photo though, that’s much less an issue than it’s been in the past. We’ve been buying Bota Box recently, and the 3 liter size (equal to four standard bottles of wine) fits perfectly on the shelf and doesn’t call too much attention to itself with a somewhat understated package.

Once we embraced the packaging, it allowed us to realize all the other benefits that come in the box. Not only is it much easier to carry home, at $17.99 it also averages out to $4.50 a bottle, which is about half of what we were paying before. The box also allows us to drink as much or as little as we wish, without worrying about opening a bottle (or a second bottle) and having wine left over. The bag stores wine for up to 6 weeks with no loss of freshness.

It looks just as good in the fridge.

They’re also much better environmentally. According to some statistic we dug up someplace on the internet, boxed wine decreases landfill waste by 91%, and reduces greenhouse gasses by 76%. Those are some pretty hefty numbers, but setting aside landfill waste, wine bottles also take up a hell of a lot of space and add a lot of weight to our recycling bin. From now on we won’t be spending every Thursday wondering if our neighbors are silently judging us for having so many empty bottles in there. Wine boxes just look like so much cardboard in the bin.

But the final, and perhaps most ironic benefit of the box is that it finally enables us to get some use out of the fancy wine decanter we bought at Crate and Barrel two years ago and almost never used. It wasn’t worth bothering with for bottles, but it’s incredibly convenient to just pour a few glasses from the box into the decanter and carry it up to the bedroom or out to the balcony.

Have you tried any of the new arrivals in the boxed wine market? Brought a Black Box to a dinner party or a box of Pepperwood Grove up to your rooftop deck? Have any thoughts or favorites? Let us know about it in the comments.