If you’ve ever been inside a Su Casa location, you know it’s rarely the same store twice. They’re constantly bringing in new pieces, redesigning whole areas of their showrooms, and keeping things fresh and interesting. In that same spirit we’ve decided to ‘test’ our new sofa from Pad by putting it through its paces with several different arrangements.

It’s starting to feel like a regular game of musical chairs here at the Chophouse, and it certainly hasn’t been dull. Another Saturday, another floor plan. It’s beginning to feel like every time we turn around there’s a new place to sit. 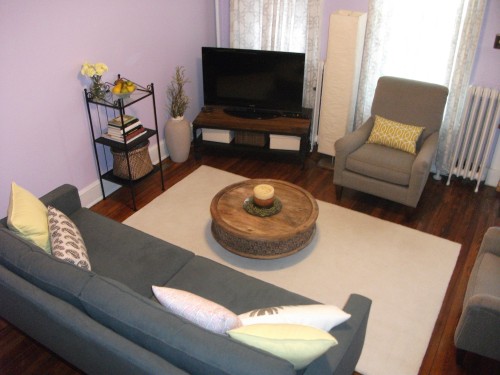 This is our general layout for this week.

When we had a completely bare room this is roughly how we imagined we might place the furniture. We were really into the idea of having the television in that corner, because it’s easily visible from the kitchen and the head of the dining room table. We thought it might lead us to eat more meals at the dining room table instead of on the couch like the slovenly bachelor we are.

The first two arrangements we tried both suited us nicely. They looked great, and besides being intuitive and functional they left a bit of free space in the room. Unfortunately that’s not the case this week.

This arrangement looks great. It’s easy and intimate for conversation and feels pretty cozy when laying on the couch, but it does make the room feel a bit smaller, and isn’t great as far as natural flow goes. It might work a lot better if we had selected smaller scale pieces, but it was important for us to be able to sleep on the couch and stretch out in the armchairs.

We’re going to go ahead and chalk this up to experience and get started on the next arrangement as soon as possible. Some things were just not meant to be and alas… a sofa that faces the windows and a TV you can see from the kitchen are two of them.

Having the sofa directly below the ceiling fan has been great for napping.

This post is part of our entry in the Test it, Blog it, Win it contest. You can see the before pictures, track our living room’s design progress, and read all of the posts in this series here.