Earlier this month Baltimore found itself in the dubious third position in Travel and Leisure Magazine’s worst dressed people list. We were prepared to defend our city’s honor and attack T and L for publishing yet another lazy internet listicle, but then we thought- you know what? They’re right. The list was the result of a reader survey, so it was essentially some horribly, terribly dressed tourists passing judgements on some badly dressed locals. 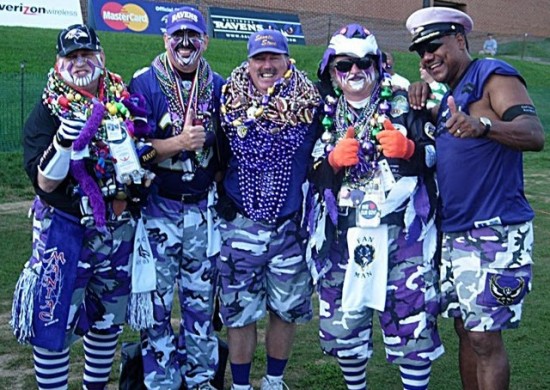 This is how the rest of the country sees us. (photo via eastcoastbias.com)

Besides, they didn’t say anything that wasn’t actually true:

According to eight-year resident Erika Poniske, [Baltimore] locals dress poorly for a host of reasons, some of which can be attributed to city subcultures. Baltimore hipsters, she says, bypass the tried-and-true thrift store, opting to dumpster dive for their clothing instead. And if you spend enough time in the quirky neighborhood of Hampden, you might just run into a woman wearing her hair in a real-deal ’50s beehive.

Poniske believes it’s the city’s die-hard commitment to all things casual that makes it most deserving of its ranking. “If you’re going to take time to dress up in Baltimore, you better be on your way to somewhere specific. Otherwise you’re going to stand out, and you’re going to feel awkward.”

This blog has been at the forefront of Baltimore style since its inception, but apparently you people haven’t taken our advice to heart. So instead of defending our fair city and talking more about all the things we’re doing right, we thought we’d take this opportunity to let you all know exactly what you’re doing wrong…

5/ Wearing clothes with stains, creases and holes. This is the equivalent of picking up food out of the garbage, sniffing at it and saying “It’s still good!” Instead of getting rid of stained or torn clothing, or at least relegating it to around-the-house or workwear, Baltimoreans habitually pretend that no one else notices the giant ketchup stain on their favorite shirt. We’re also convinced that none of you own an ironing board.

4/ Being 2 years behind fashion. Sure, not every city can be New York, Paris or Milan, but they have a new invention called the internet, and any asshole art schooler with a digital camera can be a street fashion blogger. We love that Baltimore is a city dedicated to looking good on a budget, but there’s a right way and a wrong way to do it. The right way: incorporate subtle runway type accents into your wardrobe. The wrong way: wait for designers’ down-market lines and black label shit to trickle down to TJ Maxx.

3/ Not knowing what season it is. We don’t mean this in a ‘rules of fashion’ sense, we mean it in a calendar and weather report sense. Maryland is lucky enough to have four seasons, but since none of those seasons are particularly extreme and weather can change within a season, people make bad seasonal fashion choices all year round. In Baltimore it’s not uncommon to see a group of women out together, one wearing ugg boots, one wearing heels and another wearing flip flops.

2/ Our hipsters are hipper than your hipsters. People throw around the word hipster all the time now, but Travel and Leisure seems to have found someone who actually knows from hipsters. Her criticism of dumpster diving hipsters isn’t far off. While hipsters in places like Brooklyn and Portland frequent curated vintage boutiques and have lists of favorite Etsy sellers, Baltimore hipsters will wear anything they can get for free. Even if it comes out of an eviction pile.

1/ Purple Camo Pants. It’s bad enough that half the city is wearing Ravens jerseys to work on Fridays and then again all day Sunday, but just when you thought that the fashion abortion of camouflage cargo pants couldn’t get any worse, they’ve gone purple. If you bought your pants at a roadside stand in Overlea or Halethorpe, you’ve absolutely done your part to make us one of the worst dressed cities in the nation. Thanks, football people.