As a lifelong Orioles fan and a big league bon vivant, we were incredibly excited to hear that former 3rd baseman and politely tolerated player Melvin Mora would be opening his own restaurant here in Baltimore.

We were ambivalent about seeing Mora leave the Orioles, but of course we’re happy to see that he continues to live in Fallston, and has decided to follow in the footsteps of greats like Gino Marchetti, Rick Dempsey, Boog Powell and Ray Lewis and open up his own restaurant. Naturally, we had to review it for the blog. 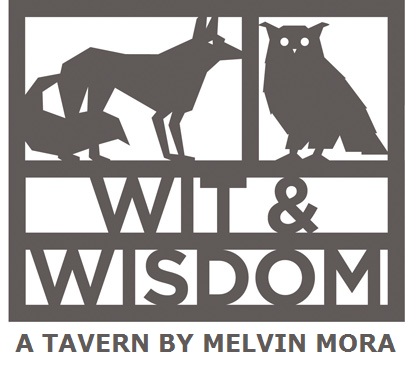 When we heard that Mora’s new bar was going to be located in the ground floor of the Four Seasons hotel, we thought that was kind of an odd location for a sports bar. We love hotel bars, but this place is fancy-schmancy Hon. We gotta admit that we felt our Dundalk showing a little bit when we walked in there in a Wieters jersey and our best Bill Hagy straw hat, but whatever.

It’s not just that Wit and Wisdom is more skybox than bleachers though, it’s that once you sit down and get a beer you start noticing things. The first thing you notice is that for a sports bar, there’s not really even a lot of memorabilia around the place. It’s uncanny. All they’ve really got around is these funny looking giant electric candles or whatever. That would make sense in a Thomas Edison themed bar or something, but for a baseball bar we just don’t get it. Melvin should have gone down North Point Flea Market and got some old pennants and jerseys and stuff. Make it like Nacho Mama’s. Now that’s a class joint.

Melvin hardly even put any TV’s in there! How are we supposed to watch the O’s and the Terps, and deal with all these bandwagon Caps fans that are suddenly all over everywhere when they’ve only got like 2 little TV’s and they’re practically hidden behind the bar???

That must be it, because at this point we were getting tipsy and slipping into Bawlmerese and the waitress was ignoring us, but it all made sense: This is a Venezuelan Place. She probably no habla the Ingles. That’s cool though. At least we could get some chimichangas or gorditas or maybe even a Doritos locos taco or whatever they eat in Venezuela. So after about 15 minutes of “Hola! Hola, Chica! Yo quiero comida! Mas comida por favor!” we finally got the menu.

And what do you think we found? Nachos and emanadas? Hell no… that menu didn’t make any sense at all. The chicken soup has frog legs in it and the porridge has duck tongues. The corn dogs have lobster in them? Melvin! No me gusta amigo! We get that Giselle Mora has to be handy in the kitchen to feed six little chirrens, but whatever happened to good old Rice-a-Roni and Esskay hot dogs?

This Tavern by Melvin Mora is an okay place to drink beers since it’s on the water and close to the stadium, but it’s impossible to have a really good sports bar without a bunch of TV’s and junk food and stuff. We had to give it one out of four on the cartoon bird scale, and we’re not in any hurry to go back.