As human beings trying our best to live in polite society, we like to think that we’ve pretty much got it all figured out. Sadly, nothing could be further from the truth. We’ve barely got anything figured out. We may not want to admit it, but we’re pretty much just making things up as we go along.

Our habits and folkways aren’t set in stone, but are instead more like raw clay, being constantly turned and shaped to suit our needs. This is true in all aspects of life, and of course of life in the tavern. Once upon a time in this country there were plainly stated rules covering things like unescorted ladies in the bar, the proper use of spittoons, and general public speaking. Nowadays we let women come freely, and let the TV do most of the soapboxing. We’ve adjusted to the times. 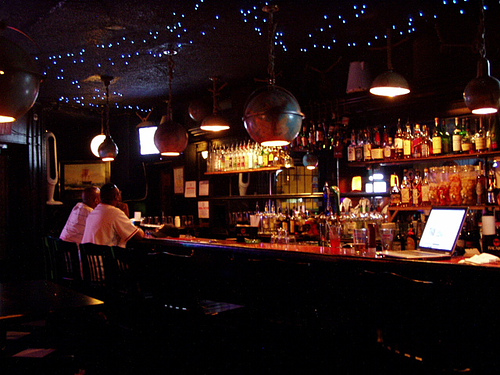 Stop it. Just stop it.

We’re still adjusting. Twenty years ago there were no sort of rules in place for cell phone conversations. Nowadays everyone fully understands that the right thing to do when taking a call is to step outside, or at least into a secluded corner, and to keep calls quiet and brief. Hell, most people in this day and age have come to prefer text messaging to talking, and the problem has almost solved itself.

Although we’re talking on our phones less and less, we seem to have them out more and more. And why not? Smartphones are great. They’re like miracles! Bars used to carry newspapers for the news and Guinness record books to settle bets and Mr. Boston guides to reference drinks. Now we can do all that on a phone. Not to mention talking to every friend you’ve got simultaneously via Tweetbook Plus, seeing where they actually are on Foursquare, and maybe even convincing them to use the internet to buy you an IRL beer via Beergivr.

But we’ve got to draw the line somewhere. And we’re drawing it here.

A bar is not your ‘other office.’ It’s not where you go to catch up on emails or work on your term paper. Keep that shit at Starbucks. A bar is a bar. It’s for drinking. Drink. Hey, we get it. We have a blog and pretty much stay online all day every day. We’ve come to a point where the internet and ‘real life’ are almost entirely integrated. But you know what? The bar is where we go to get the fuck off the internet for a while.

Laptops are becoming smaller and lighter every year, which means they’re turning up in more places than ever before. We’re making a rule: No more laptops in the bar. They don’t belong there, and if you can’t tear yourself away from your computer for an hour, then you don’t belong there.

Just because your Macbook is the size and weight of a place mat doesn’t mean that it is a place mat. We come to the bar to drink, and if we trip over your stupid power cable on our way to the head or spill a beer on your $2000 notebook, it’s your own goddamn fault. You’ve been warned.