You might be surprised to hear it, but the Chop fully approves of hotel bars.

Most often we find ourselves in one when we’re overseas. Many times hotel bars are the cream of the crop, and some countries’ bars are found to be so wanting that the hotel bar with the western visitors is the only place you can count on getting a decent drink poured and not have to put up with a lot of the unsavory things that are prone to happen overseas.

The clientele in a hotel bar is, obviously, mostly out-of-towners. They seem to be of a few certain types, which are easy to identify at the hotel, but are fairly rare away from it. There’s business travelers, who are pretty straight-laced, and then there are people who travel a lot for work, who aren’t what you’d call “businesspeople” and pretty much drink from the time the trade show closes until it opens again. There’s cougars and hospitality employees and tourists and even the Chop. 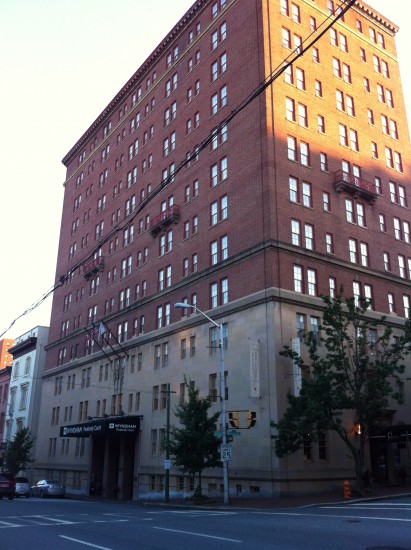 Sometimes the Chop needs a break. Sometimes we just get tired of Brewer’s Art and Dionysus. Sometimes we want to drink in a place that’s actually not a basement, and be served by someone in a tie and not a Dead Boys T-shirt. It’s times like this when we hie down to one of Midtown’s best kept secrets, George’s of Mount Vernon.

We’ve been to George’s a few times for dinner, and are never disappointed. The ambiance is hard to beat, the food is delicious and without pretense, and the service is much more personal and friendly than you’d expect in such a place. It also doesn’t hurt that the prices are set so that one can easily pick up the check on date night.

We didn’t get the full benefit of George’s though until we went there for happy hour. The bar in there feels more like home than any bar in the city. But not like your fixer-upper Hampden rowhouse… like a really, really nice home.

The 12′ ceilings, crown molding, 10 foot windows, chandeliers, and posh leather furniture all give the impression that you’re in the sort of place that Scott Fitzgerald and Gertrude Stein drank when they lived in Baltimore, and hell, maybe they did. There’s something nice about stepping back into the jazz age for an hour, and a stiff old-fashioned in this place will set you right. It’s just the thing to brace you up for the travails of modern life.

Best of all? George’s happy hour is Sunday- Friday, and all beer, glass wines and rail drinks are 2-for-1.