One of the problems with traditional supermarket shopping is that no matter how big the stores get, no matter how many products they offer, it’s too easy to fall into the supermarket rut. The typical shopper will buy staples like bread, milk, eggs and peanut butter, and beyond that stick to certain brands and products out of habit, or let the store’s sales and loyalty cards dictate their shopping habits.

For as big as they are, most supermarkets really don’t offer too much in the way of actual variety. You get your Goya and Old El Paso in the ‘Mexican aisle,’ your Kikkoman and La Choy in the ‘Asian aisle,’ and some matzoh crackers and candles in the ‘Kosher section.’ While this is all fine for the busy-soccer-mom and lazy-bachelor set, those among us with a higher grade of culinary skill sometimes require more in the way of sourcing authentic, gourmet ingredients. With that in mind, this week we’re taking you on a tour of ten of Baltimore’s best ethnic grocery stores.

This is meant to be more of a top ten than a comprehensive list. We strove to choose grocers that are good enough to be a destination all on their own, and not an afterthought to a supermarket visit. While other lists of this type are out of date or feature stores as far away as Columbia and Laurel, or include bakeries and cafes and such, we’ve focused exclusively on the best ethnic grocers in Baltimore City. Buon appetito. 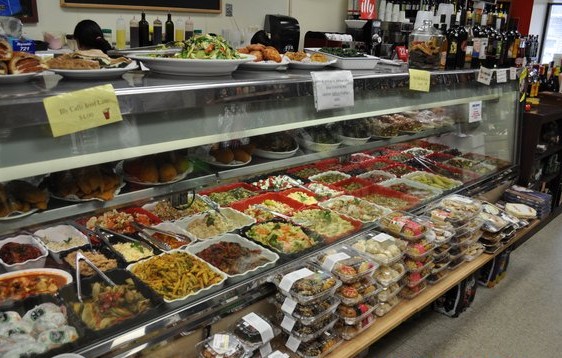 The Deli case at DiPasquale’s. Image via yelp.

Di Pasquale’s Italian, 3700 Gough St. Highlandtown: Di Pasquale’s might be the best-known place in this list, and for good reason. They earned their sterling reputation over almost 100 years in Baltimore, and there’s not a better place to grab lunch on the whole east side of town. Their Italian deli is the the kind that makes it hard to decide, because you just want to try a bit of everything, and with a large seating area and carryout options, can try your best to do just that. What we love about Di Pasquale’s is that It’s a pretty fancy place, with gourmet foods, fresh produce, Italian coffees and a full wine shop laid out quite elegantly- but it’s fancy without trying too hard, and always maintains a friendly, neighborhood feeling.

Must Try- One thing that sets Di Pasquale’s apart is that they not only focus on Italian wines, but on Italian liquors as well. They seem to have a bottle of everything Italy is producing today, and you can’t leave without picking out one of several types of limoncello for Summer afternoons.

Prima Foods Greek, 51 Kane St. Eastwood(ish): You would think that the city’s best Greek grocer would be in Greektown, but you’d be wrong. Just east of Patterson High School, Prima’s industrial locale reflects its wholesale focus. Even in their retail store, everything is scaled up. The marinated olives are in bulk barrels, the olive oil is in tanks, the cheese comes in wheel form, and the lamb is more leg than chop. They’ve got everything you’d need for a big fat Greek dinner, including a good selection of Greek wines.

Must Try-Take advantage of Prima’s scale and stock up on standard Greek favorites like large quantities of feta and 1 gallon packages of stuffed grape leaves and tzatziki.

My Polish Food Market 6208 Eastern Ave. Joseph Lee (Bayview): If we’re being honest here, My Polish Food Market isn’t terribly impressive. It’s very small and doesn’t feature anything in the way of fresh produce or baked goods, instead concentrating on Polish specialties and delicacies. The reason we’re including it here is because it’s the pierogi hook-up. They’ve got all of the traditional varieties, and they price out around fifty cents apiece. We bought a package of potato and mushroom ones and topped them with a garlic and rosemary brown butter and it was some of the best pierogi we’ve ever had.

Must Try- Pierogis, of course. Find some filled with kraut or mushrooms or something besides plain potato. You won’t be sorry.

International Food Market 7004 Reisterstown Rd. Falstaff: This may be the most authentic grocer on this list. Most of the shelf labels are in Russian, and this place carries goods from all over the post-Soviet region and beyond. It’s packed full of pickled things and jams and delicacies, and nothing here is tamed to the tastes of American palates. As impressive as the store itself is the integrated deli featuring tons of exotic salamis, bacon and sausages as well as a large selection of hot and cold prepared foods and make-ahead/cook-at-home items like stuffed cabbages. With a produce section and an on-site bakery, this shop is suitable for a gourmet meal or for a week’s worth of shopping. As a bonus, there’s also an organic health food market next door.

Must Try- A large section of the deli here is comprised of a smoked fish case. They’ve smoked more fish than you can probably name. Even if you’re not too adventurous they offer a few different varieties of smoked salmon, and where else are you going to get good, authentic smoked salmon?

Trinacria Italian, 406 N. Paca St. Downtown: Being an Italian market, Trinacria’s got all of the pastas and sauces and whatnot you’d expect, but the real attraction is things like homemade ravioli, freshly baked foccacio, and an outstanding deli that can do everything from a single sandwich to full-on catering. The somewhat uninviting exterior belies the sensory charms right behind the door. Being equal parts market, deli, and wine shop, You hardly know where to look next. But don’t take our word for it, check out the awesome 360° tour on their website.

Must Try- Come for the food, stay for the wine. The wine shop here boasts $10 Prosecco and has several other bottles priced at $3.99. They’ll even give you boxes to buy by the case. They even have our beloved Bota Box.

Our shopping basket is pretty full already, but that’s only the first half of our top ten list. Check out part two for our other five picks featuring Indian specialties, a Hebrew supermarket, the city’s best mercado Latino and more.