When you get older, you get a little wiser. At this very minute there are thousands of kids in their early 20′s texting and tweeting and Facebooking all over the city of Baltimore saying “Dude, what’s going on this weekend? Anything? House party this and dance party that and lay em down and smack em yack em. Those of us over 30 know a little better. If you were born before Reagan took office and have been around Baltimore’s rock scene for a few good years, odds are you’ve been looking forward to tomorrow’s show at the Metro Gallery for several weeks now. 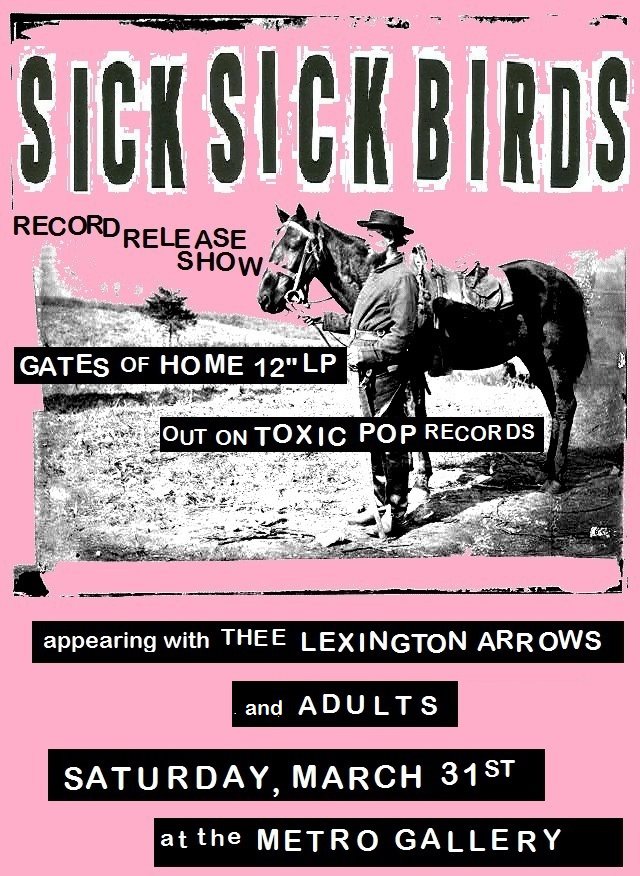 Sick Sick Birds are dropping their second full length release this weekend. It’s called Gates of Home and it is excellent. How do we know it’s excellent? Because we’re streaming the whole thing right now from their Bandcamp site.

You know how we’re always going on and on about old bands and their lame-ass reunion shows? This isn’t that. This is former members of the Thumbs and Blank and several other great bands coming together to form an even better band, and put out stronger work than anything they’ve done before. Don’t be surprised in December when Gates of Home starts turning up on a bunch of year-end best-of lists, because this is easily one of the better records you’ll buy this year.

We kind of feel bad for SSB though, because they just might get this show stolen right out from under them by ADULTS. While your kid brother and annoying college neighbors are saying “Huh? Adults? Never heard of them.” Us old punks can read the fine print, which says that this band is made up of Greg and Christian from Slow Jets and Lo Moda respectively, as well as Pete and Lee from the Fuses, who were absolutely better than any band currently existing in Baltimore.

ADULTS played another show at Metro Gallery last weekend, and word on the street is that they were tremendous to see live. Even if you can’t make it tomorrow, these guys are definitely a band to watch closely in 2012.

And even though we really love the idea of the two-band show, we’re going to make sure to get there early and see Thee Lexington Arrows as well. They’ve been playing surfabilly garage rock for quite a few years now, and they’re pretty damn good at it by now. If you haven’t had a chance to see them yet, do yourself a favor and check them out this weekend.