So, we wrote a whole big blog post last year about how we were going to put on our Sunday best and go to Pimlico and piss away a few bucks and fake-it rich. As it happened, we got called up last minute to help a friend move. We swore we’d get up to Old Hilltop the next week, and then one thing led to another and long story short, we never made it to the races at all last year.

Well, the Spring meet is here again, and this year, goddamn it, we’re off to the races. We suggest you check out some live racing too, any day except the Preakness. Don’t go to Preakness. 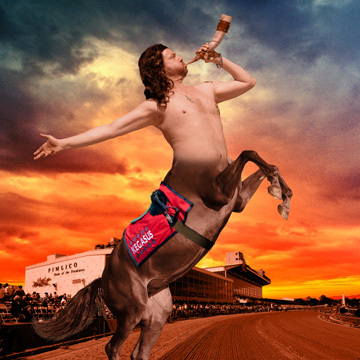 Kegasus, and by extension the Preakness itself, is an embarrassment to our city before the eyes of the nation.

The Preakness organizers have failed miserably in recent years, and this year they’ve more than outdone themselves with the God-awful, thoroughly embarrassing Kegasus campaign. We’ll say first off that we’re no big fan of Danny McBride or any of the white trash, delusional, substance abusing memes surrounding his characters. It was bad enough when Keystone Beer ripped him off entirely, but this rip-off of a ripoff with a horse twist is more watered down than Keystone Beer itself.

Unfortunately, the Jockey Club and their ad firm Elevation Ltd. have decided to make an ‘outside run’ at the highly prized 18-25 male demographic, and don’t mind alienating anyone and everyone who doesn’t fit that demo along the way. The funny thing is, they had those customers locked up in the BYOB days, and blew it all to hell by discontinuing that policy. We understand that they’re trying their hardest to divorce the Preakness from actual horse racing by making the infield a generic rock music-and-shitty-beer festival, but as we’ve already pointed out, there are hundreds of festivals in Baltimore every Summer. Frat boys don’t need Preakness as an excuse to get drunk outside.

The way we see it, the Jockey Club blew a golden opportunity last year when they came crawling back to 18-25 year old males. They should have followed the example of Churchill Downs and divided their infield into sections.

Note: this is not actually Pimlico.

Even a very simple division like this one would make a lot more sense than having a handful of random frat bros wandering dumbly from tent to tent looking for the shortest beer line. We would have liked to see them make the backstretch the collegiate/rock concert/ all you can drink area while reserving the third and fourth turns for the Media pavillion (to which tickets could also be sold, because that’s a lot of real estate. Make the clubhouse turn some sort of family friendly picnic-type area, and market tickets to church groups and the like, and make the home stretch and starting gate area some sort of liquor company sponsored glutton’s paradise with food trucks, tents set up by regional restaurants, mircrobrew beer gardens and the like. Sell passes to each section at different prices, with premium charges for “2 section” passes, and even an “all access infield” pass for people who want to see the bands and get the best fare and best views.

Is this a brilliant revolutionary idea? No. But it’s a good idea. It’s a workable idea. It’s an idea that would make us seriously consider buying Preakness tickets, and it took us about one minute to think of it. If the Maryland Jockey Club would trouble themselves to think seriously about the Preakness for one fucking minute, their sport and our tradition would both be better off.

As it is though, we’ll be watching our racing with the pensioners on the non-stakes days, Irishing up our coffee and going two across the board on a maiden.